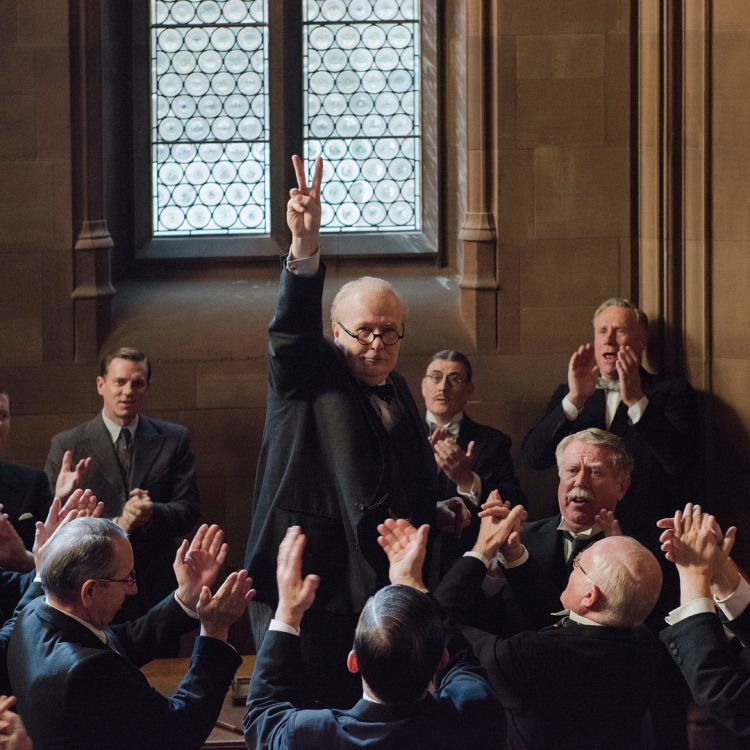 Darkest Hour is one of those rare biopics that, for the most part, breaks free of formula to deliver an intriguing portrait of a complex and controversial figure. Similar to Phyllida Lloyd’s The Iron Lady, it pins its hopes on its central performance (by Gary Oldman at his chameleonic best). Whereas that film tried to cram Margaret Thatcher’s entire life into 104 minutes of screen time, Wright and screenwriter Anthony McCarten wisely opt instead for a portrait of a complex and controversial figure — Winston Churchill, to be exact — by focusing on the challenging and definitive period of his career, and take it a step further by narrowing the scope down to a single, pivotal few weeks.

Although no one would realize until years later, the events of May and early June 1940 would prove to be a major turning point in World War II. The German war machine had blitzkrieged its way across Europe, and Poland, Denmark, the Netherlands, and Norway had fallen in the span of six months, with France and Belgium soon to follow. Britain’s attempt to stem the tide has resulted in 300,000 English soldiers — virtually their entire army — trapped on the beaches of Dunkirk.

Enter Churchill (Oldman), an unpopular politician selected to replace a slightly more unpopular Prime Minister Neville Chamberlain (Ronald Pickup) on the eve of an existential crisis. Churchill’s instincts are to stand up to the bullies and fight for Britain’s existence; he is opposed by an old guard haunted by the brutality of the first World War, embodied by Lord Halifax (Stephen Dillane, Game of Thrones), who argues for appeasement with the Nazi regime. Though he is an aggressive and self-assured man in Parliament, but in private he is plagued by second thoughts and the lurking fear that he isn’t worthy of the position.

Naturally, this is well-mined history, and as such there’s not much suspense or surprise to be had. It’s a chaarcter piece, and the exploration of Churchill’s interpersonal relationships that drives the story, specifically between him and his stalwart wife Clementine (Kristin Scott Thomas), his earnest young secretary Elizabeth (Lily James), and a seemingly effete King Edward VI (Rogue One‘s Ben Mendelsohn in a brilliantly subtle turn). It’s the tentative give-and-take between Churchill and Edward that resonates the most.

Oldman, whose impressive range has resulted in one of the wildest career arcs in acting history, proves to be a brilliantly unconventional casting choice. He disappears into the role (as well as the accompanying prosthetics), and captures Churchill’s mercurial temperament without resorting to caricature while nailing the man’s more boisterous moments and fiery, defiant speeches; he also proves equally adept at plumbing the man’s depths during the quieter moments.

Let’s just say it now: His is the performance to beat for next year’s Academy Award for Best Actor. It’s an astounding portrait of a man wrestling with self-doubt at the worst possible time, and a sobering reminder of what true leadership on the global stage once looked like.