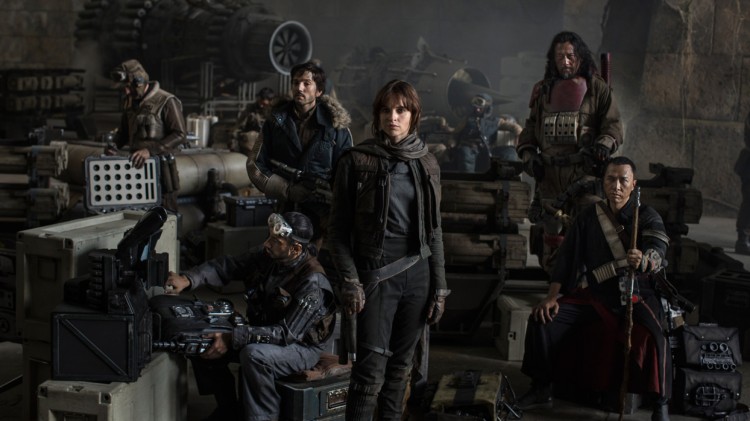 There is indeed life to be found in the Star Wars franchise beyond the saga of the Skywalker clan. Despite being a prequel scandalized by extensive reshoots and featuring nary a Jedi to be found, Rogue One is one of the best Star Wars flicks to date — as well as the grittiest, darkest, and most grounded.

The bare-bones synopsis goes like this: Petty criminal Jyn Erso (Felicity Jones) is pressed into service by the Rebel Alliance when word is leaked in regards to an Imperial weapon of mass destruction — one designed in part by her father, Galen (Mads Mikkelsen). It soon becomes apparent exactly what they are up against (hint: it rhymes with “Death Star”), and a team of misfits lead by Jyn and Cassian Andor (Diego Luna) races against time to obtain the means necessary to defeat said battle station.

Their primary obstacle is the full might of the Imperial forces, represented in the form of ladder-climbing douche-weasel Orson Krennic (Ben Mendelsohn). The Death Star is his pride and joy, as well as his path to the Empire’s inner circle  — something the security leaks have put into jeopardy.

Anyone who’s seen the original knows how this all plays out; fortunately, screenwriters Chris Weitz and Tony Gilroy and director Gareth Edwards (Godzilla) are savvy enough to make the story more about the journey than the destination, and in doing so focus more on their cast of characters, the story’s theme of hope in a time darkness and oppression, and on the high price the Alliance paid in personnel and materiel in order to achieve victory. Theirs is a down and dirty war flick. It’s not quite Band of Brothers in Space, but it does channel a little bit from the likes of The Guns of Navarone and The Dirty Dozen, among others.

Rogue One is character-driven above all else, and it introduces a slew of memorable figures in to Star Wars lore. The grimly determined Jyn stands apart from the more optimistic heroes of the previous films, though like the others she is haunted by her share of familial trauma. Andor is the kind of haunted fighter we’ve always suspected lurked on the fringes of the saga. Jones and Luna wear them well, but they are occasionally upstaged by their cohorts: Donnie Yen carries most of the spiritual weight and get the best of the fight scenes as Chirrut Îmwe, a blind devotee of the Force whose partner, Baze Malbus (Jiang Wen) brings the requisite, terse gravitas as a battle-hardened assassin. Forrest Whitaker wrings a great deal from a brief appearance as Saw Gerrera, a character from the Clone Wars and Star Wars Rebels animated series who’s been at war so long that his body and mind have been devastated. It’s Alan Tudyk who steals the spotlight from everyone however, via voice and motion-capture performance as re-programmed Imperial droid K-2SO, whose wry, off-the-cuff delivery provides some necessary, dry comedy relief. Think C-3PO without the histrionics or effete manner.

If there’s a weak point, it’s with the movie’s primary villain. Krennic is written and performed well enough to illustrate the sort of banal, Nazi-esque evil that powered the machinery of the Empire, but the character too often feels like a plot device, one who affects our heroes but doesn’t really cross paths with them until brief, inevitable confrontation during the climax. It doesn’t help that he’s overshadowed by the more overpowering villainy of Darth Vader (in brief but effective appearances) and another old foe, who shall not be named here. (There’s are a lot of surprise guest appearances in Rogue One, including a few blink-and-you’ll-them cameos. The fan-service is strong with this one.) It’s a thankless role, but the mercurial and highly talented Mendelsohn nevertheless brings the slimy bastard to life.

Edwards’ visceral style is just as effective here as with under-appreciated Godzilla, and he succeeds in capturing the vintage look and feel of the original film (cheesy ’70s mustaches and all) while turning in a wholly modern movie. Much hay was made of the reshoots handled by Gilroy, but whatever changes made during the eleventh hour were done so seamlessly. The movie has an epic sweep that opens Star Wars universe wider than it’s ever been. The only real indicator of what might have been changed lies in the trailers, much of which contain  footage not found in the final film and hint at some interesting alterations.

More importantly, it finally fills in the gaping plot hole that has hung over the first movie like a lingering bantha fart: Why in Yoda’s name would the Empire build a super-weapon that could be taken out by one clean shot down the tail pipe? Let’s just say that Kevin Smith can at long last stop losing sleep over that one.