Movie review: “The Shape of Water” 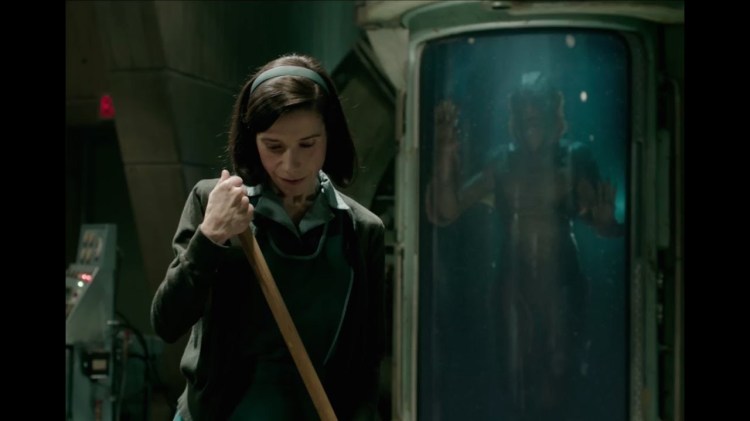 It’s a classic romantic premise: star-crossed lovers from different worlds meet cute, fall in love, and struggle to be together in a world intent on keeping them apart. Granted, the star-crossed lovers in Guillermo del Toro’s The Shape of Water are a mute cleaning woman and a fish-man, but whatever — it still works. Leave it to a writer-director known for horror-fantasy and creature features to deliver a creature feature fairy tale as beautiful a love story as any ever put to film. It’s the Amélie/Creature from the Black Lagoon mash-up you never knew you wanted.

Much as he did with his superb The Devil’s Backbone (2001) and surreal Pan’s Labyrinth (2006), del Toro uses a turbulent period setting as an engine for dark fantasy; in this instance it’s the double-whammy of the civil rights movement and Cold War paranoia of the 1960s. His “princess without a voice” is Elisa (Sally Hawkins), who works at a dank underground government laboratory in Baltimore and lives above a movie theater.

Elisa’s lonely routine is derailed by the arrival of a merman of sorts (del Toro’s long-time collaborator Doug Jones), captured in the Amazon and brought to the US for examination by Richard Strickland (Michael Shannon, once again in his creepy WASP villain element) and shady scientist Hoffstetler (Michael Stuhlbarg). Elisa earns the  tormented creature’s trust, and a bond forms between the two that eventually blossoms into something more.

Del Toro paints his tale in broad strokes, as he often does, and the movie’s social allegory is often too on-the-nose, with Elisa’s co-worker Zelda (Octavia Spencer) and gay next-door neighbor Giles (Richard Jenkins) serving up sometimes poignant, often simplistic contrast to Strickland’s cartoonish toxic masculinity and the kitschy optimism that camouflaged the bigotry and anxiety of the ’60s. On the other hand, a minor plot thread involving workplace sexual harassment is far more effective, thanks to good timing and subtlety.

As a love story, it is hard to beat. There’s a purity of emotion between our mis-matched protagonists, and Hawkins’ performance as the sweet, vulnerable, and earnest heroine is the high-point of an already impressive career. Jones, whose filmography includes Hellboy‘s own ichthyoid Abe Sapien and the Faun in Pan’s Labyrinth, has the needed experience to project beyond the makeup. This voiceless duo sweeps us up in their offbeat romance.

Much like its close relative the recently remade Beauty and the Beast, it urges us to look beyond the surface and see the person within; unlike that particular fairy tale, The Shape of Water feels more real and relatable. It also has more kink and a better song-an-dance number.