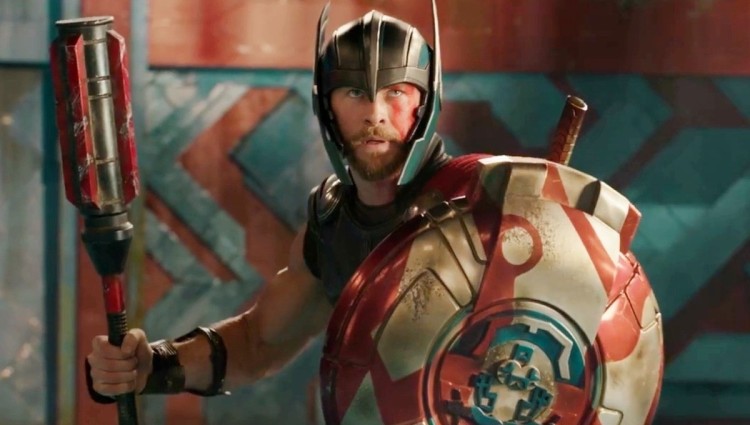 Let’s face it: the God of Thunder has arguably been an outlier in the Marvel Cinematic Universe, struggling to mesh with its more rounded pegs. Fortunately, with Thor: Ragnarok, writer-director-actor Taika Waititi (What We Do In the Shadows) wisely mines humor from the character’s inherent silliness and wraps it around an dazzling, offbeat core of straight-up comic book antics. It’s the best of the three Thor movies, and the most-engaging presentation of the Thor to date. (That is not intended as backhanded praise, by the way.) Like Doctor Strange, Spider-Man: Homecoming, and the Guardians of the Galaxy movies, it goes a long way toward loosening up Marvel’s reliance on its stuffy house style.

Waititi and company waste no time setting up the story; matter of fact, they jump into it a little too quickly, dispensing with a few supporting characters in perfunctory fashion and setting up the conflict with minimal preamble. We learn it’s been two years since Thor (Chris Hemsworth) went on walkabout in the middle of Age of Ultron, seeking answers to the mysterious, apocalyptic visions he experienced and searching the universe for the Infinity Stones.

He returns home to uncover his treacherous foster brother Loki’s (Tom Hiddleston) coup d’etat. Quick detours to New York (with a cameo by Benedict Cumberbatch as Doctor Strange) and Norway in search of their father, Odin (Anthony Hopkins), result in the return of their heretofore unknown sister Hela, the Goddess of Death (Cate Blanchett having loads of fun with villainy). The real black sheep of the family, Odin’s bloodthirsty firstborn, secretly imprisoned for millennia by their father, makes Loki look like Dennis the Menace.

She makes quick work of the Odin boys, shattering Thor’s magic hammer and chasing the two from Asgard. They wind up on the literal trash heap of the galaxy, a planet called Sakaar, run by a grandiose hedonist known as the Grandmaster (Jeff Goldblum, whose singular acting style is a perfect fit for the movie’s weirdness). Thor is forced to participate in the world’s gladiator games, which reunites him with Bruce Banner (Mark Ruffalo), who’s been trapped in his Hulk form since last we saw him. Hijinks ensue as our hero tries to get off-planet in time to save Asgard from destruction.

Anyone expecting Ragnarok to serve up a Marvel-style take on the titular Twilight of the Gods is likely to be disappointed; that said, it does conclude with a massive and surprising shake-up of the Marvel universe that, like Civil War, further raises the stakes ahead of the looming Avengers: Infinity War.

As dire as all of that sounds, the movie stays firmly focused on action and humor. Waititi’s chops as an actor and filmmaker are firmly anchored in the latter, and he displays an impressive knack for the former. The copious action sequences range from goofy, bizarre, and brutal as needed, with the gladiatorial battle royale between Thor and the Hulk ticking off all of the boxes. The overall pacing does stumble on occasion.

Visually, the worlds created by Waititi and his production crew is nothing short of breathtaking. The movie embraces its roots in a way few comic book movies have, translating the unique pop art-style of Jack Kirby (co-creator and original artist of the the Thor comic book) in near-perfect detail. Sakaar is a Blade Runner-esque cityscape as envisioned by Willy Wonka.

Ultimately, the movie works because of its choice casting. As Thor, Hemsworth has more room to maneuver than he has in the past, and Hiddleston is still able to keep the duplicitous Loki feeling fresh. Ruffalo finally gets to something different within the limited confines of Banner and his unjolly green döppelganger. Hopkins wrings every last drop from his minimal screen time.

The newcomers also make their mark with a mixed bag of characters. Hela, who mostly stomps around Asgard killing time before the climactic final battle, doesn’t exactly break the long-running curse of bland Marvel villains; however, Blanchett has a blast vamping it up even more than she did in Cinderella, and the enthusiasm is infectious. Karl Urban somehow leaves an impression the thankless task of playing her tentative henchman, Skurge, whose arc never really delivers. Tessa Thompson (Westworld, Creed) makes one hell of an impression as Valkyrie, a former elite Asgardian warrior turned hard-drinking rogue. Jeff Goldblum is, well, Jeff Goldblum (in the best possible sense). Waititi also provides some dry humor as earnest and slightly clueless rock creature Korg.

Waititi seems to be intent on subverting his own movie with one well-timed gag after another, usually at the expense whomever happens to be monologuing. It’s that kind of self-awareness and refusal to take itself too seriously (we’re looking at you, DC) that helps Marvel’s shtick and comic book movies in general maintain their forward momentum. no doubt the wave will break at some point; for now, it’s still a fun ride