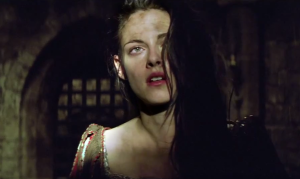 One of Kristen Stewart’s more expressive moments from ‘Snow White and the Huntsman’.

A perfunctory and wholly unsatisfying experience, Snow White and the Huntsman is a glossy, bloated, and hollow movie that is stunning to look at but far too dull to invest much interest in. First-time director Rupert Sanders is a virtuoso in terms of visual flair, but he has a tin ear when it comes to actual storytelling.

In short: Youth-obsessed sorceress Ravenna (Charlize Theron) murders a widower king on their wedding night, usurps the throne, and imprisons his fair daughter Snow White in a castle tower. (C’mon — have we learned nothing from Goldfinger?) The land suffers under her rule, as do the people — especially the young maidens whose youth she absorbs to extend her life and that of her creepy, doting brother Finn (Sam Spruell).

Eventually, Snow White comes of age (enter Stewart) and escapes, vowing to reclaim the throne. She’s destined to, as we are reminded over and over and over again, and there’s never any doubt that she will, making for a quest that is as gripping as a 3am burrito sortie.

The huntsman (Chris Hemsworth, slumming between Thor and Avengers flicks) hired to track the girl down instead rescues her. One half expects a love triangle to develop when Snow White’s childhood crush William (Sam Claflin) arrives on the scene, but Sanders skirts the issue with a curious degree of ambiguity for a fairy tale. It’s an odd choice, especially for a re-interpretation that targets young female moviegoers as much it does action/fantasy fans.

It’s that empty plotting that sinks Snow White and the Huntsman. There’s never any jeopardy or doubt involved in a story where the protagonist is destined to succeed, and Snow White’s pre-ordained success is such a given the entirety of the plot feels obligatory, contrived, and wholly predictable. You can practically hear the narrative gears clicking as it rambles from one scene to the next.

The movies rules of engagement are poorly defined and often contradictory, and the elements of the original fairy tale — the magic mirror, the poisoned apple, the kiss that revives the heroine — are given new context but feel obligatory more than necessary.

The actors are stuck with carrying a tepid adventure story, to varying degrees of success. Stewart’s range is limited to two expressions, Slightly Drowsy and I Think My Corset is Too Tight, and it’s hard to swallow her third-act conversion into a Joan of Arc-esque revolutionary. Hemsworth often seems as bored by her as we are. Theron is the only one who fully engages the material, taking her character to the brink of camp excess by playing her as a hybrid of Elizabeth Bathory and Joan Crawford attired in Lady Gaga evening gowns. By the time the dwarfs show up (in the form of shrunken down Ian McShane, Toby Jones, Bob Hoskins, Ray Winstone, and others) the realization sets in that this is a good as it’s gonna get.