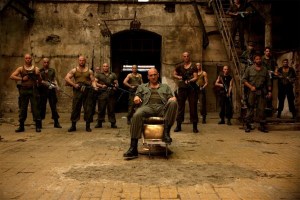 Veteran actor Ralph Fiennes makes his directorial debut with a bold adaptation of William Shakespeare’s devastating take on cults of personality. In a bold step, Fiennes has abandoned the story’s original ancient Roman setting in favor of “a place called Rome” that resembles a modern war zone, keeping the original dialogue and utilizing modern trappings and stark photography to open the story to contemporary audiences. It’s a brave choice, one that gives added resonance to a classic that is largely unfamiliar to current audiences.

Caius Martius (Fiennes) is a hard-boiled soldier equally loved and feared by the people of Rome. The city is at war with the Volscians, led by Martius’ bitter rival Tullus Aufidius (Gerard Butler). The Volscians are defeated in a violent confrontation in the city of Corioles, one that ends with an unfinished duel to the death between Martius and Aufidius. Martius returns triumphantly to Rome where the Senate gives him the honorific title of “Coriolanus” and rewards him with a lofty political office for which his is thoroughly unqualified. All he has to do is win the votes of the common people.

It’s that last little bit that proves to be Martius’ undoing. He’s a beast on the battlefield, but thoroughly unfit for politics. Before his victory against the Volscians, Martius had brutally suppressed food riots in Rome, and throughout his career his disgust with the common people and there petty squabbles had always been thinly veiled. That contempt boils over during his political campaign, culminating with a public outburst that ends his career. He is exiled from Rome, condemned to never see his ambitious mother Volumnia (Vanessa Redgrave), trophy wife Virgilia (Jessica Chastain), or young son (Harry Finn) again. A vengeful Martius forges an alliance with Aufidius and wage war on Rome.

The revised setting enhances Coriolanus, giving viewers a point of reference it can relate to. The opening monologue of Martius’ aide-de-camp Menenius (Brian Cox) is delivered at a press conference, cable news talking heads replace the traditional greek chorus, and the scenes of chaotic urban warfare echo what has become common fare on the nightly news — and it all lends the material an eerie prescience.

As is usually the case with a film version of one of the Bard’s plays, much is trimmed from Coriolanus in order to shoehorn it into a two-hour running time; veteran playwright and screenwriter John Logan (Gladiator, Hugo) does an admirable job, but it’s hard to shake the feeling that some important details were lost. The pace never falters though, sweeping the viewer along, though occasionally moving too swiftly to let the story unfold on its own.

Fiennes occasionally plays to the rafters as Martius, a dog of war who should’ve been kept on a shorter leash, but never looses control of the character. Fiennes played Martius on the London stage in 2000, and wears him like a second skin. He makes Martius’ arrogance palpable, and when he unforgettably upbraids Aufidius in the film’s climax he spits the word “boy” with such vitriol that it becomes the most venomous of insults.

Despite the editing to the story, Butler and Cox are able to squeeze quite a bit from their respective roles, but Chastain seems defeated by the material and never fully brings Virgilia to life. Ultimately it is Redgrave who dominates with one of her best performances in recent years. She brings clout and regality to Volumnia, the manipulative and possessive mother who dooms her son in her attempt to elevate him.

In bringing the setting forward, Fiennes wisely chose cinematographer Barry Ackroyd (The Hurt Locker) and shot on location in Serbia. The grey skies and war-blasted urban landscapes of the alterna-Rome they create deftly mirror the desolation of Martius’ soul.