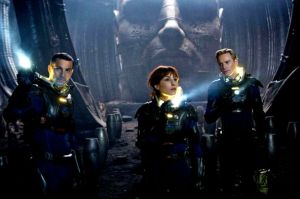 The cast of ‘Prometheus’ learn that in space, they still can’t hear you scream.

Ridley Scott’s return to science fiction for the first time in 30 years has all the earmarks of a re-awakened giant wiping the sleep from his eyes. Equal parts intriguing and infuriating, its oblique approach to some big questions is unsatisfying.

Much has been made of Prometheus‘ “is it or isn’t it?” status as a prequel to Scott’s Alien, the 1978 monster-movie-in-space game changer that cemented his career and left an indelible mark on the genre. Scott has played coy on the subject, saying that at most it’s a prequel in the loosest possible terms. In truth, it is indeed a prequel, at least in a broad sense, with all the flaws and expectations that dog such films, one that greatly expands the Alien universe while providing the most terse possible origin of the species in its final scene. Hardcore fans with high hopes are advised to temper their expectations.

The story is set during the closing years of the 21st century, where archaeologist Elizabeth Shaw (Noomi Rapace, the original Girl with the Dragon Tattoo) and her scientist boyfriend (Logan Marshall-Green) discover cave paintings that point the way to a group of planets that may or may not be the source of all life on our world.

A few years later, an expedition financed by elderly trillionaire Peter Weyland (Guy Pearce under a lot of age make-up) arrives in said star system and quickly discovers a dormant outpost belonging to an advanced civilization, some of whose corpses lie about. The group’s exploration raises some unsettling questions and sets off a messy chain of events that does not end well.

In opting to go beyond making just another Alien flick, Scott has widened his scope considerably. Prometheus is visually lush and atmospheric, combining judicious use of CGI, location shooting in the volcanic hinterlands of Norway, and Giger-inspired set design to create a unique and foreboding world.

And, of course, as sci-fi horror Prometheus wouldn’t be complete without plenty of gore. There’s nothing here to rival the chest-bursting scene of its progenitor, but there are enough slimy, tentacled, invasive goings on to make anyone with a sexual hang-up squirm more than once, and the fear of impregnation touched upon in Alien is given a new spin with a grisly and gratuitous surgery sequence.

It bravely dives into H. P. Lovecraft-style cosmic horror territory (fans of his At the Mountains of Madness will find some striking similarities here), but much of it lacks resonance, since Scott and screenwriters Jon Spaihts and Damon Lindelof give us very little in the way of engaging characters. Shaw is a rare specimen of scientist with religious convictions, but the necessary exploration of these two aspects of her character is largely glossed over. As an icy and aloof corporate exec, Charlize Theron continues the villainous streak she recently began in Snow White and the Huntsman (thankfully without the camp) but her motivations are vague. Most of the rest of the cast mills around, waiting to die horribly, even the talented Idris Elba. Ironically, and much like HAL 9000 in Stanley Kubrick’s 2001: A Space Odyssey, the most well-rounded and engaging crew member is the least human, in this case the android David (Michael Fassbender), who displays a fascinating mix of childlike wonder, bitter resentment, and amorality in an amazingly nuanced performance by the actor.

The movie’s themes of mortality, existence, and what it means to exist and create life in whatever form are ambitious stuff, and prove problematic for Scott and company. Ultimately it’s a good thing that it asks the big questions without attempting to answer them — let’s be realistic: how could they? — but what little they have to say about them is disappointingly conventional.

Prometheus overreaches in its attempt at epicness, and builds towards a pay-off that never truly arrives. That said, the movie’s ambiguous prologue and open ending allow for the possibility of more to come, and with it some much-needed perspective on what we’ve been given here.