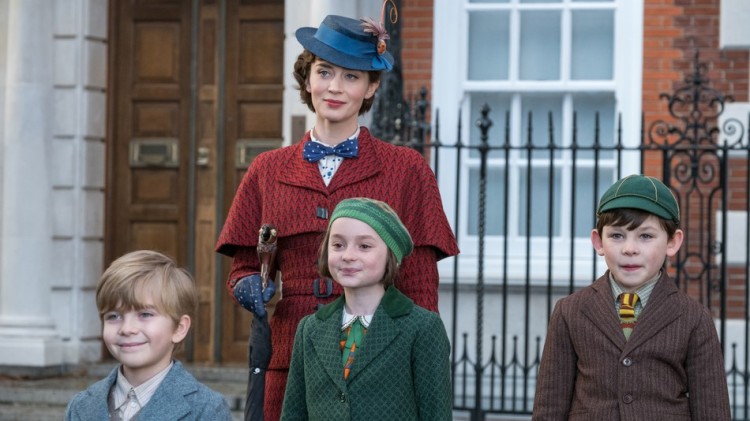 There’s more than a spoonful of sugar to be had with Disney’s sequel to Mary Poppins (1964), which is content to play it safe with a rehash of the original’s plot and equally derivative musical numbers. Nevertheless, it’s an bubbly concoction that goes down easy, and the adolescent target audience isn’t likely to nitpick.

Michael is barely keeping it together, and the family is on the verge of losing their idyllic home at 17 Cherry Tree Lane when super-nanny Mary Poppins (Emily Blunt) once more floats down from the clouds to subtly impart earthy wisdom and help the Banks to help themselves before Michael has a nervous breakdown. It’s a disturbingly cheerful rendition of the Great Depression that makes O Brother, Where Art Thou? look like a Cormac McCarthy epic.

Granted, the original is a bit of a mess only remembered for Julie Andrews’ crisp performance and classic musical numbers by Richard and Robert Sherman. (Author P. L. Travers hated it with a white-out passion, which is why it took more than 50 years for Mary to return.) Blunt bravely steps up to the task at hand, nailing Poppins’ tricky combo of acerbic dry wit and nurturing warmth. Lin-Manuel Miranda is his usual solid self as lamplighter Jack, an obvious analog for chimney sweep Bert (Dick Van Dyke, who makes a spirited cameo) who helps pump some energy into the episodic tale.

The musical numbers yield mixed results. None have the impact of “Spoonful of Sugar”, “Let’s Go Fly a Kite”, or the one that gives autocorrect apoplectic fits. To be fair, the Sherman Brothers never managed to top them either. “Nowhere to Go But Up” has a nice throwback sound, “A Cover Is Not the Book” is an infectious number that plays into the wheelhouse of director Rob Marshall (Chicago and Into the Woods), and “Trip a Little Light Fantastic” gives Miranda a chance to show off a little.

Mary Poppins Returns can’t quite escape the shadow of the original, but it proves just as adept at projecting a bright, optimistic spirit and sending audiences out of the theater with a catchy tune or two stuck in their collective ears. Time — and box office receipts — will tell whether or not this will spawn another sequel. (Mary Poppins Strikes Back perhaps?)