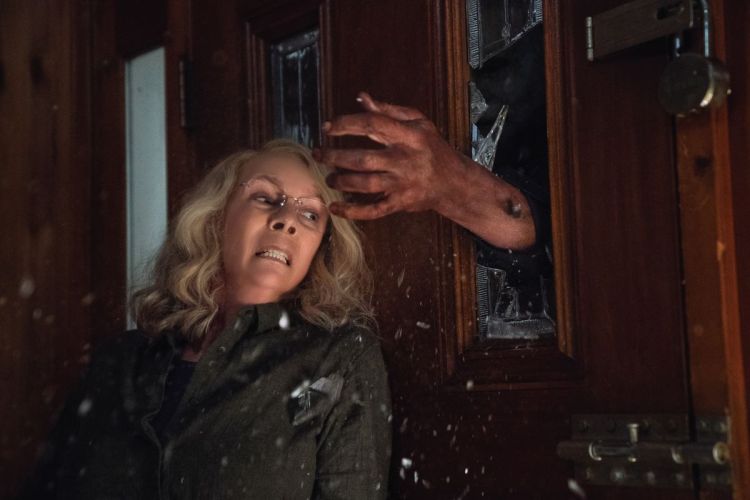 Halloween wasn’t exactly the first slasher flick when it hit the screens in 1978, but John Carpenter’s low-rent classic established the template for the sub-genre. It’s been a rocky road since then, with countless knock-offs and remakes littering its wake.

Even though they’re treading well-worn ground, writer-director David Gordon Green and co-writers Danny McBride and Jeff Fradley have created a throwback popcorn horror flick by getting back to the basics and wisely ignoring every misbegotten sequel and remake (including Halloween II, the only one Carpenter had a hand in; and Halloween H2O, whose major plot twist they dismiss with a wry throwaway line). They also have the savvy to dive deeper than ever into the twisted victim/victimizer relationship at the center of the franchise, and plumb it for all it’s worth.

In the 40 years since the events of the original, a mentally scarred Laurie Strode (Jamie Lee Curtis) has become a prepper for a very specific, and very personal, doomsday scenario. Following his killing spree in the first movie, Michael Myers (Nick Castle and James Courtney) has spent the last four decades locked in an insane asylum, but Laurie is convinced that he will one day come looking for the proverbial one that got away. Her home is now a fortress with reinforced doors and a panic room with a well-stocked arsenal. Where some people might decorate their lawns with pink flamingos and garden gnomes, hers is dotted with bullet-riddled practice dummies. Laurie has spent the years waiting — and hoping — for Michael to escape and give her an opportunity to put the boogey man down for good.

All of this has taken a its toll on her. She has a strained relationship with her daughter Karen (Judy Greer), and a tenuous one with her granddaughter, Allyson (Andi Matichak). Neither off them have really grasped the depth of Laurie’s paranoia and trauma, but they get the chance when Myers escapes from custody and picks up where he left off — including going after the girl who got away.

Green’s pacing is flawless, as is his knack for subtle flourishes. He pays homage to the opening sequence of the original while one-upping it with an impressive, chilling mid-movie single-take tracking sequence. He caps the creepy cold-open scenes with nice spin on the first movie’s opening sequence, establishing quickly and clearly where his sensibilities lie.

Green and company don’t settle for wallowing in nostalgia, though; they’re more forward thinking than that. Not unlike the Scream franchise, their Halloween is a rare instance of a horror film willing to explore the effects of the trauma and grief experienced by the rare survivor. Curtis takes the notion and runs with, delivering a fierce and fearless performance that few slasher flicks deserve.