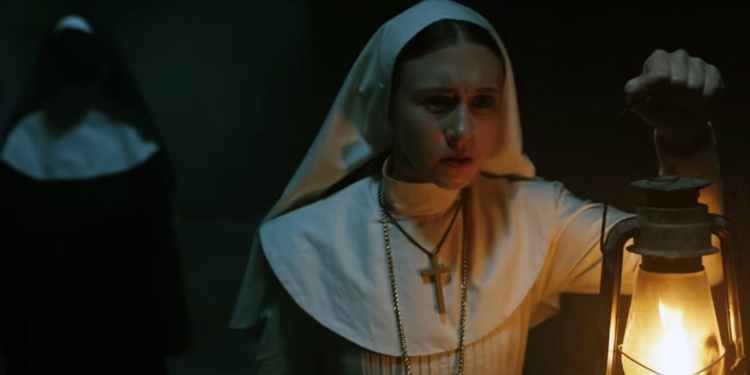 After the runaway success of the Conjuring movies and the Annabelle killer doll spin-off sub-franchise, a movie based on the demon nun of The Conjuring 2 must have seemed like a no-brainer. Sadly, there are indeed no brains to be found in The Nun. Director Cory Hardy (The Hallow) falls back too often on predictable jump scares and telegraphed camera pan “gotcha” moments. Sure, William Friedkin once said that terror is watching something approach. Thing is, it’s not scary when you can see it coming from a mile away.

The ghost-busting, demon-hunting couple Ed and Lorraine Warren (played with impressive gravitas by Patrick Wilson and Vera Farmiga) at the core of James Wan’s shared universe only make brief bookend appearances; instead, we are saddled with bargain knock-offs Father Burke (Demián Bachir), a broody, glowering Vatican paranormal detective with a dark past (of course); and naive novitiate Sister Irene (Taissa Farmiga, younger sister/clone of Vera).

The story takes place in 1952 (no doubt upending certain fan theories). World-weary Burke recruits Irene to assist him with investigating the suicide of a nun at a remote Romanian abbey, where a convoluted plot involving Templars, black magic, a portal to Hell, and a metric ton of genre cliches goes absolutely nowhere. A twist in the final scene, crafted to bring the franchise full circle, not only plays fast and loose with continuity, it proves to be utterly pointless and unnecessary.

In addition to the tired plotting it repeats most of its scare tactics ad nauseam, and it doesn’t take long for any sense of urgency to evaporate and a tiresome repetition to kick in. It wouldn’t so bad if it were at least laughable; sadly, it’s just dull.

The Conjuring movies were propelled by their characters; the Warrens were a believable couple, and enough time was invested in their clients to get the audience to care about the fates. The Nun has none of that, and its characters are little more than tropes on legs. Farmiga fares the best; she actually gets a character arc as a doe-eyed bride of Christ thrust into a nightmarish scenario. However, she too is buried under cheap scares and overblown effects.

When your big bad resembles ’90s-era Marilyn Manson in a wimple but isn’t nearly as creepy, your movie is pretty much screwed. Even The Sound of Music had scarier sisters than this.