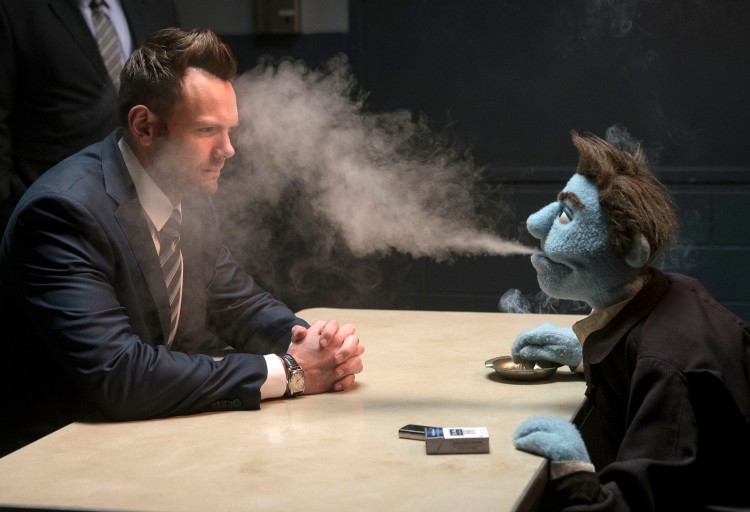 Despite what the hype would have you believe, The Happytime Murders is not the most inappropriate puppet movie ever made (Peter Jackson’s Meet the Feebles still retains that honor). There is a lot of fluff wrapped around its hard-boiled innards, but somewhere in there is also a gleefully raunchy subversion of film noir and an attempted metaphor for race relations that is unfortunately hamstrung by spare writing.

Written by Todd Berger and directed by Brain Henson (son of the late Muppets creator Jim Henson), it plays like L.A. Confidential meets Who Framed Roger Rabbit? down on Avenue Q, but without the inspiration. It’s an above-average, one-viewing wonder that at least manages to be more than a one-joke movie.

The film centers on the unlikely anti-hero Phil Phillips (voiced by Bill Barretta), a disgraced cop (and the LAPD’s first and last puppet detective) now working as a private detective in a world where puppets are a part of society, and generally treated as second-class citizens by humans.

Phil is forced to team-up with his embittered ex-partner, Det. Connie Edwards (Melissa McCarthy), whose super-cop exterior masks one of the weirder addictions to be found in a crime flick. Cue the double-crosses, frame-ups, interrogations, dark secrets, weird puppet sex, and other vital tropes of the genre. (Okay, maybe not so much that last one.)

The Happytime Murders is a brisk 91 minutes, but doesn’t quite move fast of enough to keep us from realize how thin the plot is. (Most viewers will have it mapped out in their heads about 15 minutes in.) Berger and Henson tick off most of the boxes on the genre’s checklist, but it’s so by-the-numbers that doesn’t work as a whodunnit.

In all fairness, it’s main goal is comedy, and whether or not it succeeds in the attempt is a matter of personal taste. McCarthy relies heavily on her usual shtick; fortunately, she’s bailed out self-parody by her surprisingly effective chemistry with her felt-skinned co-star. Elizabeth Banks, Joel McHale, and Leslie David Baker each have  what basically amount to extended cameos. In the end, it’s Barretta and Maya Rudolph (as Phil’s girl-Friday Bubbles) who steal the spotlight.

As a goof on crime dramas and a subversion of our childhood memories of Sesame Street and The Muppet Show it’s hit and miss, depending on how feels about silly string ejaculate and a Basic Instinct reference that can never be unseen. No judgments here.