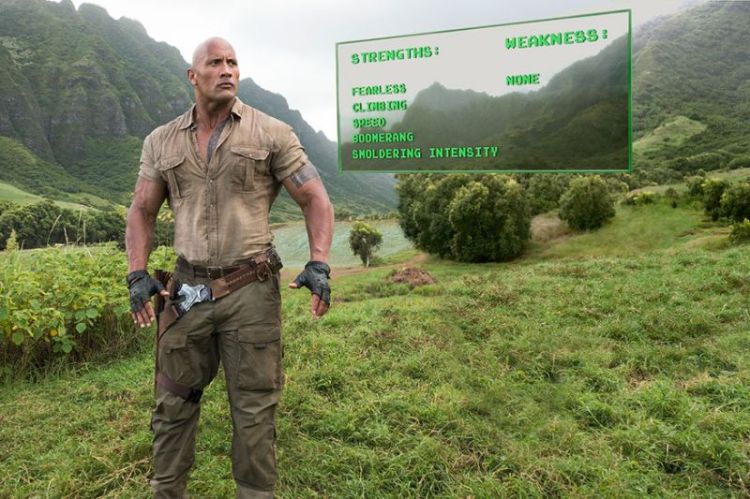 Much like the under-appreciated Zathura: A Space Adventure, writer-director Jake Kasdan’s Jumanji: Welcome to the Jungle is a spiritual sequel to Joe Johnston’s 1995 classic Jumanji, rather than a reboot or a remake. It pays mild homage to its predecessor while charting its own course with a solid, if obvious, spin on the premise. It’s a pleasant surprise that amounts to a breezy, diverting action-comedy with low stakes but lots of heart. Welcome to the Jungle does’t supplant the original, but it’s a painless way to kill a couple of hours with the extended family during the Christmas weekend without scandalizing your dear old Nana too much.

In this iteration, Kasdan and his team of writers update the concept by having the board game morph into cartridge-style console game before claiming its next victims. (“Does anybody even play board games anymore?” quips one ill-fated character.) Enter our heroes, a group of archetypal teens — awkward nerd Spencer (Alex Wolff), star athlete Fridge (Ser’Darius Blain), mousey outcast Martha (Morgan Turner), and self-centered popular girl Bethany (Madison Iseman) — who discover the game during high school detention and are sucked into its digital world, where they must solve riddles and complete specific challenges in order to advance through its levels and beat the boss villain (Bobby Canavale) without using up their allotment of “lives”.

Each is placed in the body of a digital avatar representing one of the game’s adventurers: Spencer becomes hunky everyhero Dr. Smolder Bravestone (Dwayne Johnson); Fridge is placed in diminutive zoologist “Mouse” Finbar (Kevin Hart); the self-conscious Martha resides in Lara Croftian babe Ruby Roundhouse (Karen Gillan); and, in a gag that pays more dividends than it reasonably should, Bethany is forced to inhabit schlubby cartographer Dr. Sheldon Oberon (Jack Black). During the course of the adventure, each learns a valuable life lesson about who they are and what they’re becoming.

The video game conceit works in the movie’s favor as a handy means to explain away the predictable story and most of the plot holes. Sure, tt’s a one-joke movie, but the cast rises to the occasion and wrings every laugh it can from that joke. Each of them commit to their roles fearlessly — especially Black (who is eerily good at channeling his inner Valley Girl) and Johnson (who gamely pokes fun at his action hero image). The world doesn’t exactly need — or want — a Jumanji sequel, but at least we got one worth watching.