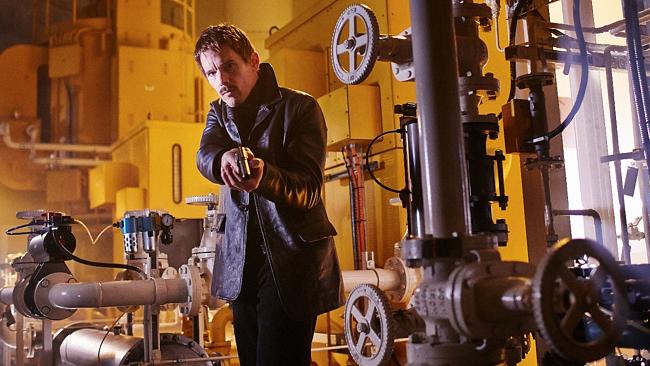 It’s difficult to determine who is likely (if at all) to enjoy Predestination: the fans of the classic Robert A Heinlein short story “All You Zombies” that it is based on, or uninitiated genre fans free of preconceived notions about the Spierig Brothers’ time travel flick. The movie is hampered by slavish devotion to the source material and a nowhere-bound thriller subplot tacked onto Heinlein’s story to puff it up to feature length.

It’s not entirely Michael and Peter Spierig’s fault, however; the source material, which hinges on temporal paradoxes and a tricky mind-bending timeline, limits one’s narrative choices. The duo struggle with the convoluted material throughout, achieving mixed results.

The story begins in its present day, that of a slightly different 1975 New York City that has been plagued by a seemingly unstoppable mad-bomber known (for reasons never explained) as “the Fizzle Bomber”. A guy walks into a bar (no, seriously),  a writer of true-confession stories for pulp magazines who relates a sad life’s story. The Bartender (Ethan Hawke) hears him out and then reveals his identity as a time traveler for a temporal agent on the trail of the bomber, and makes the man an offer: He’ll help the lad kill the person who mangled his life in exchange for the youth joining the agency.

[Warning: The plot is a tricky one to summarize without giving too much away. Potential spoilers ahead.] At this point it becomes nearly impossible to discuss the movie without revealing that Australian actress Sarah Snook plays John, the aforementioned young man, as well as a woman named Jane, an orphaned child who grows into bright young woman whose potential career in the Space Corp is derailed by a series of bizarre events. The bulk of the film deals with setting up John and Jane’s shocking relation to one another, as well as to the Bartender.

Hawke and Snook are in fine form in their roles, although Snook isn’t always convincing as a man when playing John, and both dive headfirst into their respective roles and fully engage the material. The frustrating thing is that much of the material relies on a lengthy set-up for the stories big twists and grand reveals, which means that much of the movie is consists of flashbacks and loooooong stretches of expository conversation between John and the Bartender. The two leads are too often overshadowed by the clunky mechanics of the script.

Points to the Spierigs for attempting to film a story that is largely unfilmable, though. Unfortunately, they are too engrossed with the plot mechanics of their story that they fail to make it resonate on an emotional level. They get within close range of something special, but close isn’t quite enough.