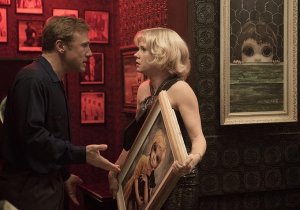 It’s been a while  since Tim Burton has offered up a movie that wasn’t A.) drenched in weirdness-as-affectation, B.) smothered in heavy-handed effects, C.) beaten into delirium with gratuitous Johnny Depp, or D.) all of the above. With Big Eyes, however, he seems ready to throw aside his stylistic crutches and tell a simple story.

However, even with much of the Burtonisms stripped out, it’s still very much a Tim Burton movie through and through. The wild true story behind the movie is so bizarre that it is impossible for the movie not to grab one’s attention, and Burton isn’t content to coast on the premise alone. Still, it feels smug and heavy-handed.

Christoph Waltz stars as Walter Keane, the painter of all those creepy, kitschy paintings of bedraggled moppets with puppy-dog eyes the size of tea saucers. These things sold like hotcakes in the 1960s (many of us born after their heyday still have nightmares about them) first as highly desired oil paintings, then as inexpensive posters. Keane made millions off what quickly became a phenomenon, even while more high-minded art world (embodied in the film by Terrence Stamp as New York Times art critic and art historian John Canaday).

Walter’s success came to an abrupt and very public halt in 1970, when his wife Margaret (Amy Adams) claimed that she and she alone painted all of those images while her husband took credit and subjected her to threats and psychological abuse to keep his secret safe. This lead to a dramatic courtroom confrontation and one of the best instances of real-life poetic justice ever recorded.

It’s a shocking and appropriately infuriating tale, scripted by Scott Alexander and Larry Karaszewski, and Burton and his crew dress it up visually with the colorful pop art flair of the ’60s, most of which is drowned out by a disappointingly loud and hammy performance from Waltz, who approaches the role as equal parts used-car salesmen and Tex Avery cartoon villain. Sure, Walter is a hustler and a bully who saw himself as larger than life and behaved accordingly, but Waltz goes screaming so far over the top that his take on the man doesn’t charm us quite the way it should, and definitely fails to make us understand how the creep could have a Svengali-like knack for control and manipulation. It’s a surprising and unfortunate choice by an otherwise gifted actor.

What’s really sad about it is the way it often drowns out Adams’ performance. That said, he may still find herself recognized during the awards season. Big Eyes is, after all, Margaret’s story, and Adams manages to delve into the woman’s psyche and probe the depths of a woman trying to be independent — at a time when women were encouraged not to — and pursue her artistic voice on her own terms. Burton, Alexander, and Karaszewski don’t give her a lot to work with, and what little pathos involved is entirely Adams’ doing — when Burton, Waltz, et al., find time to dial down their juvenile antics and let her take center stage, that is.

At one point in the movie, Casaday dismisses one of Keane’s paintings as “tastleless hack work”. The sad irony is that Burton’s jabs at the hollowness of pop art seem more than a little hypocritical.