Movie review: ‘The Place Beyond the Pines’ 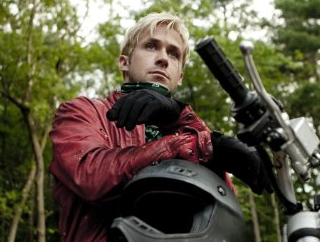 Ryan Gosling robs banks and steals the spotlight in the compelling melodrama ‘The Place Beyond the Pines’.

A sprawling tale of fathers and sons  told across generations, Derek Cianfrance’s The Place Beyond the Pines aims high, compromises rarely, and falters just a little.

Cianfrance and co-scripter Ben Coccio (Zero Day) structure their novel-like tale as a triptych of sorts, beginning with an impressive tracking shot that opens the film and introduces Luke (Ryan Gosling, who appeared in Cianfrance’s Blue Valentine), a terse, tattooed motorcycle stunt rider in a travelling carnival. During a fateful return trip to Schenectady, he learns that a one-night with a waitress named Romina (a vulnerable and deglamorized Eva Mendes) the year before made him the father of an infant son, Jason.

Luke is determined to provide for his new-found family and be the father he never had, even though that means insinuating himself into the life Romina has built with another man, Kofi (Mahershala Ali). His less-than-brilliant plan involves pulling off a series of bank robberies with seedy mechanic Robin (Ben Mendelsonh, who nearly stole last year’s Killing Them Softly).

Luke inevitably runs afoul of the law, which results in a shift of focus to ambitious hero-cop Avery (Bradley Cooper) who, like Luke, is surrounded by corruption and disappointed loved ones. Though Avery more successfully exploits his situation for personal gain, his actions and their ramifications create a ripple effect along with Luke’s.

Which leads to the movie’s third and slightly weaker chapter, set 15 years later. Avery is now divorced and embarking on a promising political career; his son AJ (Emory Cohen) is a privileged kid with a chip on his shoulder, one bust away from a wasted life. Jason (Dane DeHaan) is your typical loner from the wrong side of the tracks to whom Luke is a nagging mystery. AJ and Jason strike up a doomed friendship. 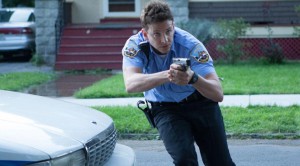 It’s tempting to call The Place Beyond the Pines a commentary on the haves and the have-nots, but Cianfrance and Coccio are interested in mining more intimate terrain. They take a few risks and make some ambitious choices that the story can’t quite live up to in the end, but ultimately yield an emotionally honest and compelling narrative — albeit a flawed one. The opening third is gritty, tense, and unpredictable; the second chapter plays like a familiar hero-cop vs. corruption crime saga, but a well-formed one; and the finale meanders a bit and can’t quite live up to expectations, but is anchored by tight performances from DeHaan and Cohen.

For all its striking stylistic flourishes (courtesy of cinematographer Sean Bobbitt, Shame) and provocative storytelling, Pines is a melodrama at its core, and it’s Gosling who runs away with it early on and never quite relinquishes his hold on it.