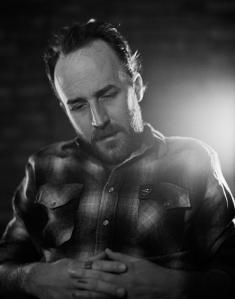 For writer-director Derek Cianfrance, filming his multi-generational crime drama The Place Beyond the Pines in Schenectady, New York, was a no-brainer (after all, the movie’s title is the translation of the Mohawk word that the city takes its name from). Cianfrance’s wife is from the town, and their regular trips to visit the in-laws amounted to a decade’s worth of location scouting.

It was a location that almost killed the movie in its tracks, however: In August 2011, two days into filming, Hurricane Irene struck the area and Schenectady experienced its worst flooding in 500 years. With the equipment trucks suddenly underwater, production was brought to halt. Members of the camera department had to use a canoe two rescue the first two days’ worth of footage. Filming resumed the next day.

“It’s a very cinematic town, and a town that I relate to in America, a town that had seen a brighter time,” explains Cianfrance during a publicity trip to Dallas. He’s a wiry, energetic man who wears his late-30s well, and his tattoos (which include the word “amigo” across the knuckles of his right hand) provide an interesting contrast tot he stuffy decor of the Ritz-Carlton hotel room. “I relate to that kind of tough-minded American workforce that’s just struggling by any means to make ends meet. I felt that in Schenectady. Those are the places where I want to set my films.

“It was crucial to me that we set the film there,” he says. “We couldn’t have made the film without Schenectady, without the people in Schenectady. The police force let us shoot in an active police station with real police officers. They were our consultants during the making of the movie.

“I changed the script to just be in the reality of that place, from bank tellers who had been robbed before to a real bank robber that would tell us bout how he did, and why he did it, and how it felt when he robbed banks. All that stuff was crucial, and I don’t think I would have gotten that stuff in any other place.”

Cianfrance, Ryan Gosling, and Bradley Cooper on the set of ‘The Place Beyond the Pines’.

The movie’s complex tale, scripted by Cianrance and co-writer Ben Coccio, is a three-part saga that begins with a motorcycle stunt-rider (Ryan Gosling) from a traveling carnival who takes up bank robbery to provide for the child he didn’t he had. It eventually shifts its focus to an ambitious beat cop (Bradley Cooper) with political aspirations to match his will to power. The story then skips 15 years ahead for the third panel in the triptych, which focuses on the teenage sons of both men, whose lives have been indelibly shaped for better and for worse by their fathers’ legacies.

“It came from personal experience,” says Cianfrance. “In 2007 when I was writing the script, my wife was pregnant with our second son, and I was thinking a lot about everything that was passed on to me and my legacy and everything I was going to pass on to my new child. All I was thinking about was how I didn’t want him to have all my filth, to have my stain. I didn’t want him to have my sins.  I wanted him to come into this world clean and carve his own path.

“There’s this moment early on where Ryan is holding the baby and he almost doesn’t feel worthy, he almost feels ashamed. And that moment to me was the moment about something so pure against something human, something that has sinned, and how you don’t want that kid to be born into that.”

The project gave the director a chance to re-unite with Gosling, with whom he had worked on Cianfrance’s breakthrough drama, Blue Valentine. As a matter of fact, it almost seemed fated; during dinner with Gosling, the actor described how he would rob a bank using a motorcycle and a U-Haul — which was exactly what Cianfrance had scripted.

“I said, ‘That’s crazy – that’s exactly what I’ve written into the script.’ It was one of those times when I knew we were destined to make films together.”

For the aforementioned bank robbery sequences, Cianfrance hired veteran stunt rider Rick Miller, who worked as Christian Bale’s stunt double for the Batpod scenes in The Dark Knight and The Dark Knight Rises, to train Gosling about two months before production started — a relatively short amount of time.

“We have this one scene where he has to rob a bank in one take, get out, get on his motorcycle, try to start it, it won’t start, finally it starts, pull out into traffic, be pursued by a police officer, and then blow through an intersection and avoid getting hit by 36 cars – and there was no place to switch him. He had to do that himself, the way I wanted to shoot it,” says Cianfrance, who says he was primarily influenced by America’s Wildest Police Chases and Cops.

It was a slow start for Gosling; an experienced rider, Miller rated him a three on a ten-scale who at best would become a four in time for filming. By the time production began, however, he was rating Gosling a seven. The actor was game enough to do 22 takes of the sequence. Still, some stunts were off the table for him; the movie opens with an extended tracking sequence in which Ryan’s character suits up and proceeds across to the fairgrounds to perform a “Globe of Death” stunt with two other riders. 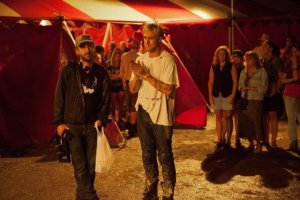 “There’s actually 22 guys in America who can do that – and Ryan is not one of them. It takes about two years to train to do that, so we felt our time was better utilized doing other things,” Cianfrance says wryly, “and there’s a camera trick we do in there that’s called the Texas Switch; I can’t tell you where it is, but if you watch closely you can see where we swap out Ryan for another stunt rider.”

Cianfrance hired former war photographer Sean Bobbitt as his director of photography, largely for his dedication for going to extreme lengths to get any and every shot.

Bobbitt’s flair for “method cinematography” meant that he insisted on getting in the cage with the stunt riders, and standing quite literally in the middle of the action as he filmed.

“I said ‘Okay, just so long as you’re protected,” he says. “He kind of looked like Robocop with a camera, all armored up. He did this beautiful tracking shot for five and half minutes, it goes into the cage, the cage door closes, motorcycles start to spin around him, and I’m watching on my monitor. It’s just amazing looking. All of a sudden my monitor goes static, and I hear a gasp from the crowd, and I look up and there’s a pile of motorcycles with my cinematographer on the bottom of it.

“So we pull the motorcycles off of him and see if he’s okay, and he’s not okay – he’s angry. He’s angry at himself for messing up the shot. I say, ‘Well look at it this way Sean, at least you’re still alive. Let’s do it again, thank our good fortune that you’re alive, and stay outside the cage this time.’ He said, ‘No, we must go to the center.’ So we did it again. This time a motorcycle stalled in mid-air and fell on him.”

Production shut down for the day, and the crew returned to the Holiday Inn where they were staying. Cianfrance received a call from the front desk around three in the morning asking if he knew guy wandering the halls in his bathrobe and asking for tomatoes. It was Bobbitt, whose time in the Globe of Death had left him with a concussion.

“The next night, he was in a very bad mood,” says Cianfrance, “and mostly he was mad that I wouldn’t let him back in the cage.”