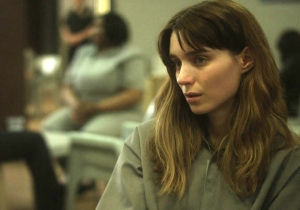 Rooney Mara plays a young woman whose depression has unexpected consequences in Steven Soderbergh’s ‘Side Effects’.

For the past few years, writer-director and indie-film icon Steven Soderbergh has voiced his intent to retire from filmmaking, and has so far failed to make good on that threat. The past three years alone have seen him release of Haywire, Contagion, and Magic Mike — each an exceptional works in its own right. With his penultimate project (if you include his upcoming Liberace biopic for HBO), Side Effects, one hopes that he’ll put off retirement a little longer, if for no other reason than to go out with a more focused bang.

As ominous as that last bit might sound, it’s not meant to imply that Side Effects is a bad movie; it’s a modest one hampered by the fact that it zigzags between two or three different genres over the course of its 106 minutes.

The twists make it a little tricky to summarize without giving too much away (in fact, the distributor has borrowed a page from Alfred Hitchcock and refused to let viewers into the recent preview screenings once the film had started), but the gist of it is this:

After a disturbing prologue that hints at violence and chaos to come, we are introduced to Emily (Rooney Mara, The Girl With the Dragon Tattoo) and her husband Martin (Channing Tatum, Magic Mike), who has just been released from prison after serving four years for insider trading. As Martin sets out to restore their lavish lifestyle, Emily inexplicably slides into a suicidal depression, an episode of which puts her in the care of psychiatrist Jonathan Banks (Jude Law at his best). He prescribes her a new drug called Ablixa, recommended to him by Emily’s former shrink, Dr. Victoria Siebert (Catharine Zeta-Jones). That the makers of Ablixa are willing to enlist Dr. Banks in a lucrative testing deal for the drug makes it even more appealing for him to prescribe.

Naturally, some very disturbing side effects begin to show themselves, and then the tragic event hinted at earlier takes place. Faster than you can say “class-action suit” or “FDA investigation”, the implications begin to ripple through the characters’ lives like the aftershocks of a major earthquake.

As with many of his recent films, Side Effects is in exercise in making a bare-bones genre film as filtered through Soderbergh’s trademark emotional detachment. Screenwriter Scott Z. Burns’ central characters are a collection of fractured psyches looking for a quick-fix in terms of their careers, finances, relationships, and most importantly, their mood swings. Burns’ and Soderbergh make some wry observations on our society’s increasingly common go-to move of relying on medication to fix us when we’re unhappy, and they skim the surface of the profitable business of mood-altering drugs advertised on primetime television (usually with a sphincter-clenching list of side effects casually rattled off by a chirpy narrator). It’s during these moments that Side Effects is at its most compelling and the players are at their most intriguing — especially Mara, who delivers more of the flinty vulnerability that made her stand-out in Dragon Tattoo and The Social Network — and Law, whose well-meaning physician must paradoxically dig himself deeper into a hole in order to escape.

However, they suddenly bail on the social commentary around the halfway point, shifting gears in favor of courtroom melodrama and a B-grade mystery plot that plays like a high-budget episode of Law & Order. There’s a gifted filmmaker at the helm, and so the surprise twists work better than they arguably should; still, they afterglow fades quickly and we can’t help but feel a little cheated when it does. Here’s hoping Soderbergh postpones his retirement long enough to make one more great movie.