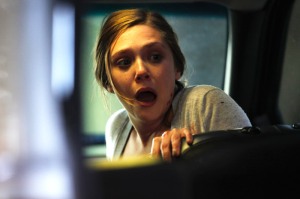 In their debut film Open Water (2003), husband-and-wife filmmaking duo Chris Kentis and Laura Lau established a knack for building suspense and genuine fear by depositing hapless everyday folks into a hostile and unforgiving environment. They carry that experience forward with Silent House, a home-invasion thriller built around a gimmick and a twist, either one of which will elevate to cleverness or kill it in its tracks, depending on whether or not you buy into them.

The twist will not be spoiled here, whereas the gimmick is pretty well known at this point: Much like Alfred Hitchcock’s Rope, Silent House unfolds in real-time via what appears one long, continuous shot (although observant moviegoers will spot at least a couple of the seams in the editing). The technique is tricky bit of stunt filmmaking that is rarely used, since they ultimately constrict the story. One can only squeeze so much plot and character development into such a tight narrative space. It should be noted at this point that Silent House is a remake of the 2010 Uruguayan movie La casa muda, which also used the same hooks, so originality is not to be found here.

Elizabeth Olsen stars as Sara, a pensive young woman helping her father, John (Adam Trese), and uncle, Peter (Eric Sheffer Stevens), empty out and repair the family’s vandalized lake house prior to putting it on the market. A remote two-story home with boarded up windows, no electricity, and in an area without cell phone coverage, it’s the sort of place that begs for nightmarish shenanigans. Within in 20 minutes Sara is separated from her family and stalked throughout the house by a stranger who is heard more often than seen.

There’s little more than that, at least not until the final ten minutes or so, when the big reveal is made and all is put into perspective. Getting to that point depends on the patience of the viewer. Though their choreography is superb, Kentis and Lau don’t maintain a consistent enough control over their filmmaking environment — nor can they, given the limits of the situation — and the movie suffers for it. The handheld camerawork is inconsistent, vacillating between fluidly unobtrusive and shaky incoherence; the lighting alternates between beautifully moody (especially the exterior scenes) and impenetrably murky.

If Silent House has a saving grace, it lies with its lead actress. Olsen is saddled with carrying the entire film; and though she’s given little else to do outside of the usual screen victim antics, she does make the most of the quieter moments that actually give her room to act. Olsen proved herself to be an actor worth keeping in eye on in last Fall’s chilling drama Martha Marcy May Marlene, which screened at last year’s Sundance Film Festival along with Silent House. Martha is definitely the stronger of the two, and it’s sad to see the talent she displayed there wasted on schlock as this.