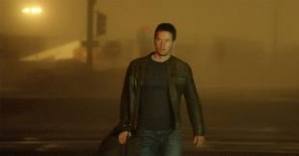 January is typically the lean season when it comes to movie releases. The studios have fired off their Oscar bait over the holidays and are saving their next round of high-profile tent pole releases for the lucrative spring and summer seasons. That said, Contraband is better than one would expect around that time of the year, though it is only an intermittently entertaining B-movie that seems content to coast for 110 minutes. What it lacks in oomph it compensates — but doesn’t quite redeem itself — with a modest amount of grittiness and a decent cast of character actors.

Mark Wahlberg stars as Chris Farraday, a former hotshot smuggler who has gone straight and is living a peaceful domestic life in New Orleans with his wife (Kate Beckinsale) and two kids until his brother-in-law Andy (Caleb Landry Jones) is forced to dump a load of drugs when customs authorities raid the cargo ship he’s working on. This puts him in six-figure debt with a local drug dealer (Giovanni Ribisi).

Chris is, of course, caught in the middle, and he and his ex-partner (Ben Foster) assemble a team and hatch a plan to smuggle counterfeit cash from Panama to pay off the debt.

From that point on, Contraband plays out like a by-the-book heist flick, one that feels overly familiar and spruced up with details lifted from other, better movies. As a crime drama it’s rote, filled with the standard formula setbacks and betrayals. As an action flick it barely qualifies — what’s there is minimal, and the best it can offer is a cockeyed armored car robbery that feels cobbled together two of the best scenes from Heist and haphazardly inserted into the story.

Director Baltasar Kormakur (who starred in the original Icelandic version, Reykjavik-Rotterdam) over-reaches and can’t seem to decide if he wants Contraband to be a pulpy crime drama or a breezy heist flick. Fortunately, it moves swiftly, and the familiar plot is populated with enough oddball stock characters to at least give us something to watch: Ribisi as yet another greasy degenerate, J. K. Simmons as a no-nonsense ship captain, Diego Luna as a paranoid Panamanian gangster (think Scarface-Lite), Lukas Haas as Chris’ twitchy partner, are all weirdly amusing.

As for Wahlberg, it’s the kind of role he can play in his sleep at this point (and he occasionally seems on the verge of dozing off here), but hey, we all have bills to pay. It’s at least better than The Italian Job.