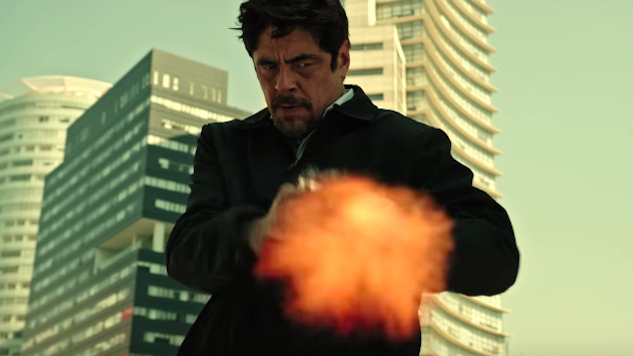 Hard-boiled with a dash of absurdist pulp, Sicario: Day of the Soldado lacks the subtle nuances and gritty realism of the original but earns points for taking chances without slipping into spectacle, as well as for moving its character arcs forward in a manner that doesn’t betray what came before.

Much of the credit goes to screenwriter Taylor Sheridan, who returns with a story that is convoluted yet clever, one that retains much of what made the first installment work. The premise links the terrorist bombing of a Kansas supermarket to Mexican cartels whose revenue has shifted from smuggling drugs to trafficking in people. A posturing Secretary of Defense (Matthew Modine) vows payback, which enacts by giving CIA operator Matt Graves (Josh Brolin, having a great year) carte blanche to provoke a war between cartels.

Graves does so by hiring attorney-turned-gangster hunter Alejandro Gillick (Benecio del Toro) and a few other mercenaries to stage the kidnapping of a cartel boss’ teen daughter (Isabela Moner), setting off a sequence of events that almost immediately spirals out of control.

Italian director Stefano Sollima (making his US debut) is strong as an action director, but character moments feel rote, and he is unable to transcend the genre the way Denis Villaneueve did with the original. The latter crafted political commentary masquerading as a political thriller; Sollima has done the opposite. That said, it is solid genre film-making, and one can’t help but want to see more of what Sollima has to offer.

Soldado lacks the palpable atmosphere of menace and dread that made its predecessor such an unexpectedly visceral experience, but it is nearly as effective. Sheridan, whose scripting credits also include the excellent Wind River and Hell or High Water (which earned him an Oscar nomination), has likely secured his place on the industry’s A-list. He has stated that he envisioned Sicario as a trilogy, and the door is left open for at least one more chapter. The expectations  placed upon it will no doubt be high.