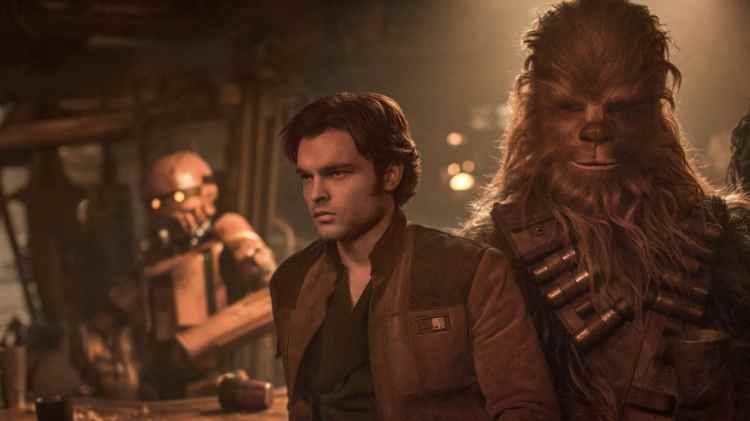 Solo: A Star Wars Story is easily the lightest, breeziest Star Wars movie to date. The stakes are low, the fate of the galaxy isn’t in the balance, and the drama is personal but not on an operatic scale. Ultimately that’s a good thing, allowing the movie to be what a Han Solo origin movie should be: a lighthearted space-western heist flick full of scoundrels and rogues. It’s frivolous but fun, which is a surprise given the behind-the-scenes drama that has dogged the production for almost a year.

Solo takes place a decade before the events of the original movie. The tyrannical Empire is asserting its influence across the galaxy, though that’s largely in the background here. A cocky young Han Solo (Alden Ehrenreich, Hail Caesar!) is scraping out a living for himself and his girlfriend Qi’ra (Emilia Clarke, Game of Thrones) on the mean streets of Corellia, while dreaming of becoming a pilot and escaping his dead-end homeworld. Han insinuates himself into the schemes of thief and smuggler Tobias Beckett (Woody Harrelson), who takes the youth under his wing and introduces him into the galaxy’s seedy underworld.

It’s at this point the movie kicks into gear, with Han encountering his loyal companion Chewbacca (Joonas Suotamo) and best frenemy Lando Calrissian (Donald Glover, Atlanta) for the first time, getting his hands on the controls of the Millennium Falcon, and engaging in a memorable train robbery in a sequence that is, frankly, better than the one we get for the notorious Kessel Run.

The plot, which involves stealing a load of volatile starship fuel in order to appease a vicious crimelord, is straightforward and often predictable, which at least plays into the B-movie charm of Solo. Its biggest strength is its cast: Ehrenreich wisely avoids impersonating Harrison Ford, but nevertheless channels the necessary swagger and charisma. Glover often steals the spotlight as the slick gambler Lando (there’s already talk of his own spin-off from this spin-off), as does Phoebe Waller-Bridge (Fleabag) as his droids’ rights advocate sidekick L3-37. There’s the lack of a strong villainous presence in Solo, although Paul Bettany is suitably sinister as refined gangster Dryden Vos; and Clarke does a lot with a constrained role.

The fan service is strong with this one, dropping easter eggs, deep cuts, and obscure references that touch upon everything from the original movies to the (shudder) prequels and even some of the Marvel and Dark Horse comic book series. Most of it will be lost on casual viewers, some of whom will be baffled in regards to one unexpected cameo.

Though the narrative is choppy at times, Solo is perhaps the most accessible Star Wars movie since the original one blew up the box office 41 years ago, as well as a reminder that there’s plenty of room for a back-to-basics approach to the series.