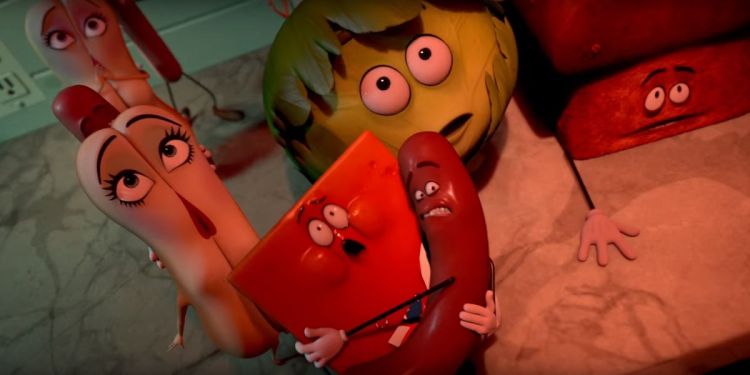 An eight-year passion project from the thoroughly baked minds of Seth Rogen, Jonah Hill, and Evan Goldberg, Sausage Party is an hilariously vulgar and unabashedly pointed satire on religion and send-up of the Pixar formula. At last, an animated movie for those of us who have pondered the existential dread at the heart of the Toy Story movies and the creepy sexuality inherent in the Cars franchise.

The setting is so brilliantly simple it’s surprising that it hasn’t been plundered already: It’s Fourth of July weekend at Shopwell’s, a superstore utopia where the food and household items greet each day with a song (composed by Alan Mencken) and dream of being chosen by their human gods (i.e., customers) and taken into The Great Beyond (y’know, purchased). Among the foodstuffs for sale is a hot dog named Frank (Rogen) and his deformed packmate Barry (Michael Cera). Frank looks forward to going into the Great Beyond with his chaste girlfriend, a shapely bun named Brenda (Kristen Wiig), at which time they can finally mate. (Of course he’s obsessed with this — he’s an anthropomorphic weiner.)

Their idyllic shelf lives are thrown into turmoil when a jar of honey mustard (Danny McBride) is returned by a customer. He’s seen things — the awful things that their seemingly benevolent creators do to food once they get home with it. The Great Beyond isn’t a paradise, it’s a charnel house, a lie perpetuated by the Non-Perishables to keep the products docile and happy.

Frank begins to question his beliefs and seeking answers to big questions, which puts his relationship with Brenda in jeopardy. They embark on a journey across the farthest aisles of the store in search of the truth, accompanied by lesbian taco shell Theresa (Salma Hayek) and bickering Lavash (David Krumholtz) and Sammy Bagel Jr. (Edward Norton) — a strangely effective embodiment of the West Bank crisis — while being pursued by a vengeful dude-bro Douche (Nick Kroll in full-on Bobby Bottleservice mode).

The jokes come at a furious pace and run the gamut of low-brow to near-genius, and land more often not. The humor is driven by an almost obsessive desire to make hamburger out of sacred cows, running the gamut from sexuality to racial stereotypes, seasoned with countless food puns, potty jokes, and innuendos.