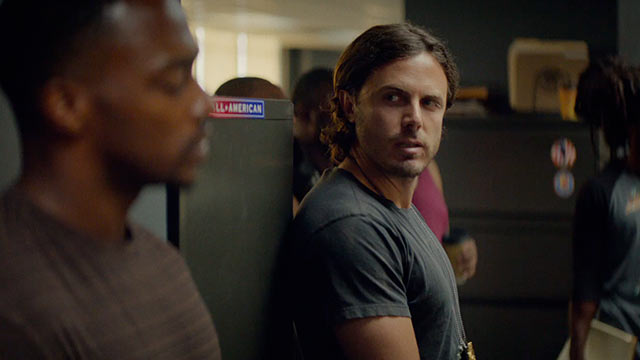 There’s a lot of appeal in the idea of Triple 9:  It’s a gritty crime drama about a couple of good cops caught in the machinations between a bunch of dirty cops and Russian-Israeli mobsters boasting an all-star cast, a no-holds-barred director, and an Oscar-winning composer. Sadly, the final product is a murky, inert movie.

The needlessly convoluted plot stars Casey Affleck as Chris Allen, a rookie detective assigned to a gang unit in Atlanta, Georgia. Neither he nor his uncle, Sergeant Detective Jeffrey Allen (Woody Harrelson) are aware that two of their own, detectives Marcus Atwood (Anthony Mackie) and Jorge Rodriguez (Clifton Collins Jr.) are part of a gang of professional bank robbers led by Michael Belmont (Chiwetel Ejiofor) and including brothers Russell and Gabe Welch (Norman Reedus and Aaron Paul).

Belmont and his crew are under the thumb of Russian mob wife Irina Vlaslov (a wonderfully cold-blooded Kate Winslet), who wants them to raid a Department of Homeland Security facility for some macguffin needed to secure her husband’s release from prison for some vaguer reason.

It’s a seemingly impossible task, and the only way to pull it off is to create a diversion big enough to occupy the majority of Atlanta’s cops. They rather quickly settle on creating a 999, police code for an officer down and in need of assistance. The obvious candidate is Chris, to whom Marcus took an immediate dislike upon their initial meeting.

Triple 9 goes almost nowhere from that point on, plodding along through schemes and betrayal that set up little and pay off even less as screenwriter Matt Cook kills time on the way to a limp finale. This is Cook’s first feature-length production, and the rough edges show. He shoots for a twisty, gritty neo-noir thriller but the necessary atmosphere eludes him at every turn. He and cinematographer Nicolas Karakatsanis have no feel for their location either, and they manage to make Atlanta look like Los Angeles even though Triple 9 was shot in the former.

Even more disappointing — and rather surprising — is that director John Hillcoat, who has helmed such brutally effective movies as Ghosts… of the Civil Dead, The Proposition, and The Road, fails to get a grip on the material too.  His pacing is limp and distant, and after a half-hour or so it becomes apparent that cop dramas aren’t his forte.

The movie works in fits and starts as an actor’s vehicle, with Affleck, Mackie, Winslet,  and Ejiofor giving strong performances. (The scenes featuring the last two, though sometimes repetitive, are the only engaging ones in the film.) Harrelson also does his best to breathe a little life into an inert movie, though he flirts with hammy on occasion. Reedus is barely in it (sorry Walking Dead fans) and Paul gives a one-note performance that suggests he hasn’t yet shed his Breaking Bad persona. Michael K. Williams is memorable in a cameo as a transgender madam; Collins plays his role so archly evil that it’s baffling he isn’t immediately arrested the moment he steps into the precinct office.

If it had been more lurid or more ridiculous, Triple 9 would at least function as a guilty pleasure. Instead, it’s a poor man’s Heat.