Movie review: “In the Heart of the Sea” 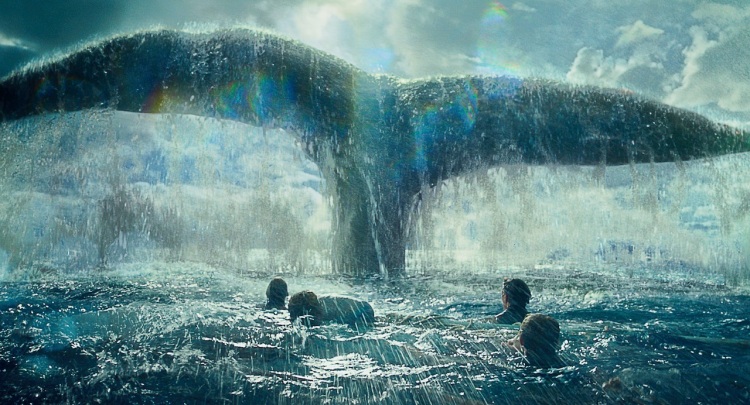 Ron Howard’s latest may strengthen the clichéd argument that “truth is stranger than fiction”, but it also suggests that it is often more boring, too.

Howard and screenwriter Charles Leavitt half-heartedly adapt Nathaniel Philbrick’s novel of the same name, itself a fictionalized account of the true story of the ill-fated whaling ship Essex, the inspiration for Herman Melville’s Great American Novel (and bane of English Lit. students), Moby Dick. The movie goes so far down the rabbit hole (or up its own ass, depending on how you look at it) as to add a clunky framing device involving Melville (Ben Whishaw) interviewing the last living survivor of the ordeal, Thomas Nickerson (Brendan Gleeson), 30 years later.

For the uninitiated: The Essex set out on its fateful voyage in 1820 with a charter to harvest 2,000 barrels of whale oil; after nearly a year at sea with little to show for it, the vessel ran afoul of a very large, very aggressive white sperm whale on the Pacific side of South America and was sunk. The survivors spent the better part of three months in three rowboats, suffering through dehydration, starvation, and other horrors before being rescued.

Much of the movie unfolds via flashback, told from the viewpoint of Nickerson, a young cabin boy at the time (played by future Spider-Man Tom Holland). We’re told that the tale of the Essex is at its core the story of two men: privileged and inexperienced Captain George Pollard Jr. (Benjamin Walker), and hot-tempered working class first mate Owen Chase (Chris Hemsworth, rocking a weird Aussie-British-New England hybrid accent). Pollard was promoted tot he position over Chase by virtue of being from an established family of Nantucket whalers, whereas Chase is looked down upon as a landlubber come lately. That’s the extent of the friction between the two, and the conflict is perfunctory at best. They’re more like the bickering couple you pray you don’t have to sit next to on the whale-watching cruise.

Thus, the movie plods along for much of its first half, until the whale takes down the Essex and true meat of the story, a mildly harrowing survival tale, begins. By that point we’re barely engaged, and the sailors’ terrible ordeal feels so watered down that the big reveal of how far they went to survive barely registers. There’s a great allegory about the unchecked exploitation of the natural world floating near the story’s surface, but Howard and Leavitt miss the proverbial boat on that one as well.

The story behind the story is a fascinating one, but Howard and Leavitt fail to tale it in a way that makes the viewer feel involved or invested. The dialogue is dull, and the visuals are so slathered with mediocre CGI that they feel thoroughly phony. Even old Ahab would be aghast at the degree of hubris on display.