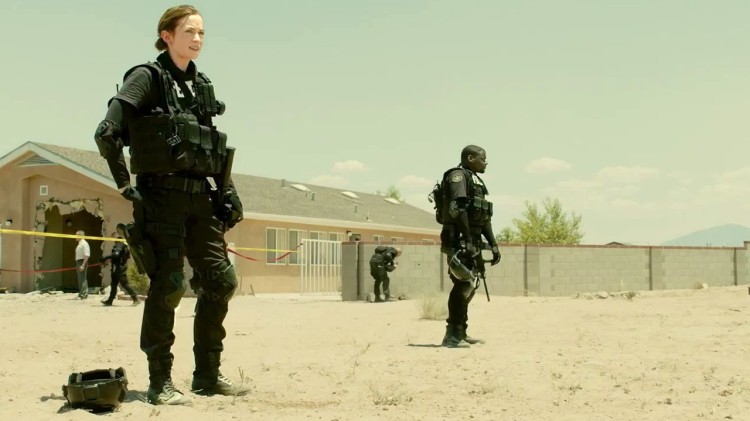 Sicario is the moral-grey-zone crime drama for those of us who felt burned by season 2 of True Detective. There are few heroes and even fewer clearly defined villains in this taught, gruesome, and disquieting narco-thriller written by Taylor Sheridan and directed by Denis Villeneuve (Prisoners).

Unlike other films that posit the need to go to extremes to win an unwinnable situation, Sicario drives home the reality that the muck and the blood doesn’t simply wash off one’s hands afterward.

Emily Blunt stars as FBI agent Kate Mercer, whose team uncovers a “house of horrors” after busting a drug den in suburban Arizona and finding far more than expected. She is quickly recruited to an anti-drug task force led by Matt (Josh Brolin), the oddly chipper yet tight-lipped agent of an unspecified government agency. She’s given next to nothing to go on in terms of the team’s mandate, told that their job is to “stir the pot” and to watch and learn, advice undercut by the assertion of enigmatic Mexican adviser Alejandro (Benicio Del Toro) that very little of what she encounters “will make sense to your American eyes”.

They travel to the relatively quiet city of El Paso, Texas, and from there descend upon less idyllic Juarez, Mexico (which resembles 1980s-era Lebanon without the nostalgia) to transfer a mysterious prisoner across the border via an armed motorcade that would make the average Secret Service detail blush. Kate has no idea what their mission is and feels superfluous to the team, and the details of the operation are divulged to her in carefully composed spoonfuls designed to string her along. Both she and the audience descend deeper into the rabbit hole of crime, corruption, and bent and broken laws until she’s in too deep for her own good.

The film is visually and aurally stunning, with Villeneuve, cinematographer Roger Deakins (Skyfall), and composer Jóhann Jóhannsson heightening the unnerving elements of the story by embedded it a discordant world; the scorched Southwestern landscapes are punctuated by inky black shadows and foreboding nightscapes, while a thrumming and often dissonant soundtrack plucks at the viewer’s nerves. Deakins somehow manages to give night-vision POV an almost ethereal quality.

This is the first produced screenplay by Sheridan, better known as Sheriff Hale on the first two seasons of Sons of Anarchy, and it’s an impressive debut. His exploration of the blurred morality of the billion-dollar drug trade and law enforcement’s collective failure to put an end to it offers no pat explanations or unrealistic solutions, only sun-bleached shades of grey.