Once upon a time it was possible to at least excuse the cinematic overkill of the Wachowski siblings as a willingness to take chances in pursuit of high-concept storytelling and the desire to push the special effects envelope. There technique was groundbreaking when it worked, and pretentious but still engaging when it didn’t.

However, with the risible Jupiter Ascending they seem to have finally succumbed to their own wretched excess, focusing more on gimmicks and admittedly stunning visuals at the complete and total expense of the story.

Mila Kunis stars as Jupiter Jones, a bored cleaning lady who learns that she is the pseudo-reincarnation of the matriarch of an aristocratic family that owns a large portion of the known universe, whose family business involves harvesting the populations of entire planets in order to distill a life-extending elixir.

Channing Tatum is Caine Wise (easily the worst action-hero name in recent memory), a grim, gritty, genetically engineered bounty hunter who is part human and part wolf, equipped with anti-gravity boots that allow him to zip through the air like a speed skater in a number of overblown action sequences. Think Flash Gordon meets a watered-down Wolverine with a little Dan Jansen thrown in and you get the idea. 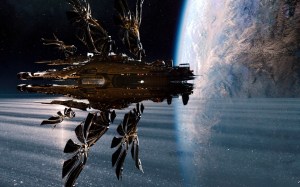 Eddie Redmayne, Douglas Booth, and Tuppence Middleton fare a little better as the trio of spoiled space-brats conniving and competing to exploit Jupiter for their own ends. Each goes hilariously over the top, especially Redmayne, who vamps it up when onscreen as if he too were a genetic hybrid, equal parts Gary Oldman and Ming the Merciless. Sadly, even they are overshadowed by the movie’s garish production design. which borrows liberally from Marvel Studios, The Fifth Element, and bastardized Gothic architecture. (Seriously, Booth has the equivalent of the Cathedral of Magdeburg mounted on the prow of his ship.)

That’s the gist of the Wachowski’s busy, hollow, limp-noodle soap opera in space, a bizarre spectacle that hinges on effete rich kids fighting over their intergalactic inheritance. It’s The Young and the Restless in space. You know you’ve lost the plot when your villain’s master plan involves badgering the main character into signing a document. It makes one long for the days when these guys had Death Stars.

Jupiter Ascending‘s biggest is Jupiter herself. She suffers from a distinct case of chronic Harry Potter Syndrome: She is yet another character with a grand, pre-ordained destiny whose outcome is never in doubt, relegated to reacting while things happen, to, at, and around her, and Kunis’ reactions range from blasé to slightly bewildered. Such a static character wouldn’t necessarily be a problem if the other characters were more interesting; alas, they too are cardboard caricatures and thinly written archetypes.

As a matter of fact, the movie as a whole has a generic, lazy quality to it. Which is shocking, considering the source. Even Cloud Atlas was more ambitious than this.