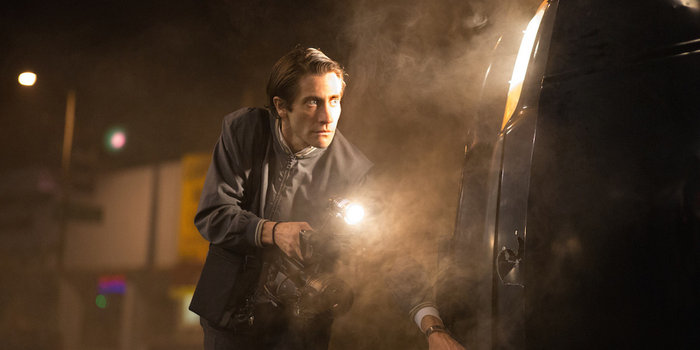 A messy but intriguing and enjoyably warped slice of modern film noir as only Los Angeles can flavor it, Dan Gilroy’s Nightcrawler isn’t quite the searing indictment of the “if it bleeds, it leads” TV news ethos, but it is one hell of a character study of a video journalist as high-functioning sociopath.

That’s largely due to Jake Gyllenhaal’s chilling performance as Louis Bloom, an ambitious man deeply lacking in scruples, or even a conscience, for that matter: He’s in the process of stealing chain-link fencing to sell as scrap metal when we’re introduced to him in the movie’s opening scenes, and steals the watch off the security guard who confronts him. He has a high opinion of himself and his abilities, and finds his calling when he stumbles across the ghoulish world of freelance video journalism, stealing and conning his way into the equipment he needs to film footage of crime scenes and accidents for sale to the highest bidder among local TV stations.

His footage quickly boosts the ratings of a bottom-tier station run by Nina (Rene Russo), who sees raw talent in his footage. What she doesn’t realize is that Lou has a film student’s eye for framing as well as drama, couldn’t give a rat’s ass about journalistic ethics, and isn’t above re-arranging and accident scene or stomping through a crime scene before the police arrive. He’s savvy enough to realize that blood and fear-mongering are what draw viewers, and is cynical enough to exploit that when three people are shotgunned in an apparent home invasion in an upper-class neighborhood. Lou manipulates the situation to his advantage from the start, using it as the leverage he needs to get what he wants from Nina (in more than one sense), using her and his sad-sack intern Rick (Riz Ahmed) as stepping-stones toward career greatness as he interprets it.

It’s that character arc combined with Gyllenhaal’s fearless interpretation of the deeply disturbed and disturbing Lou that makes Nightcrawler stand out. Gilroy’s dark satire of TV news is adequate and entertaining, but it doesn’t chart new territory — we’ve already been told that TV cameramen are assholes, station managers are cold-blooded, and news anchors are preening and vapid sock puppets since before Network. Lou, however, is something unique and special — in the sense that a moray eel is something unique and special. At first glance he’s a pathetic wannabe spouting business platitudes that give him the impression of having read half the self-help aisle of the local Barnes & Noble, it gradually and queasily becomes evident that Lou is a dangerous man to be around; one who sees people as either tools or obstacles, and responds accordingly. Gyllenhaal sinks his teeth into the role, and shed a lot of weight to give Lou a hollow-cheeked, bulging-eyed look that suggests both a figuratively and literally ghoulish being.

Granted Nightcrawler is mostly a one-man show, but it’s a show that’s hard to forget.