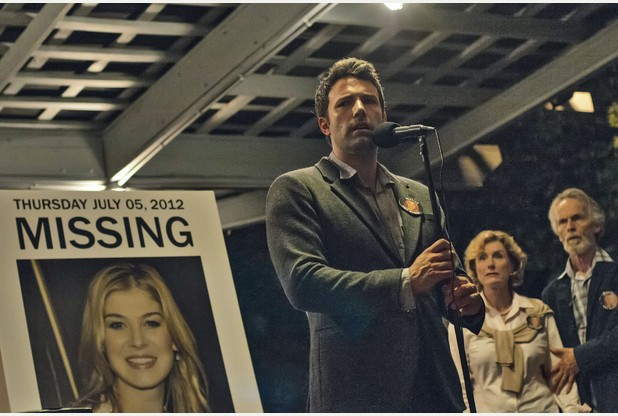 Love is a many-splintered thing in Gone Girl, a gleefully snarky satire disguised as a thriller directed by David Fincher and adapted by Gillian Flynn from her own best-selling novel. It’s likely to do for prenuptial agreements what The Bucket List did for, well, bucket lists.

This is one of those instances  of a review having to be vague in order to stay spoiler-free; indeed, Gone Girl‘s twisty and twisted plot hinges on a number of narrative left-turns that start to come fast and furious roughly an hour in.

The first half of the movie centers on Nick Dunne (Ben Affleck), a boorish husband whose adorable wife Amy (Rosamund Pike) disappears under mysterious circumstances. As the police investigation gains momentum, cracks begin to appear in the Dunne’s fairy tale marriage, the early days of which are fleshed out via flashbacks narrated by Amy in the form of diary entries, and evidence points to Nick having disposed of his wife. Cue the inevitable media circus that puts Nick in a grungy fishbowl and cranks the nightmare up to 11.

And then things get crazy.

It’s a lot of plates to keep spinning, with the bulk of the story told from the perspective of two unreliable narrators plus input from a half-dozen or so other characters with their own agendas. Ostensibly a scathing examination of how a marriage can quickly devolve from wedded bliss to homicidal tendencies (The War of the Roses as scripted by Hannibal Lecter comes to mind), Fincher and Flynn manage to also work in an equally acidic satirization of the frothing media frenzy that often gravitates to these sort of cases in real life, primarily via Missi Pyle as a cable news talking head in the Nancy Grace mold.Gone Girl also benefits from some canny casting. Affleck uses his inherent smugness and everyman qualities to nail Nick as  a morally weak, insecure man who is equal parts ingratiating and irritating. Carrie Coon steals her share of the spotlight as Nick’s no-nonsense twin sister, and Tyler Perry finally proves that he can indeed act and be funny without playing to the rafters in a in drag. Kim Dickens and an all-growns-up Patrick Fugit play well off each other as the detectives investigating the case, and Neil Patrick Harris gets a lot out of a few crucial scenes as Amy’s ex-boyfriend. However, it is Pike who catches us off-guard with a nuanced, chameleon-like performance all but guaranteed to be a career turning point. Amy is a mercurial creature, and Pike hits her notes perfectly.

It’s increasingly difficult to craft a plausible and unpredictable thriller, but Gone Girl actually manages to keep us on our toes. Fincher and Flynn pull a deft bait-and-switch, keeping us occupies with the obvious tells in order to fully blindside us with the more important twists. They strike a near-perfect Hitchcockian chord, keeping the whole shebang titillating and just wild enough to keep us hooked without straining disbelief… too much.