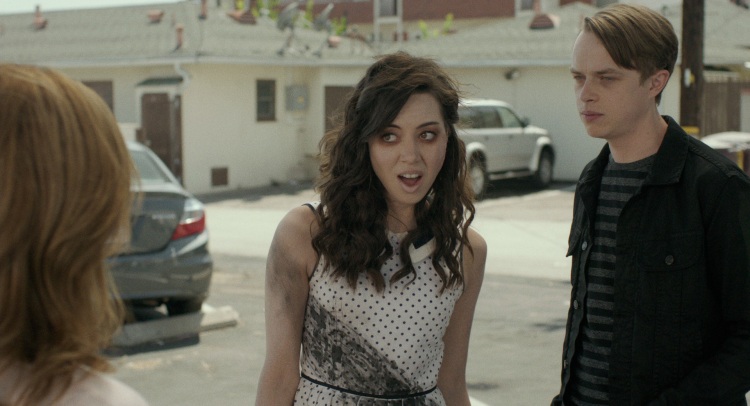 A sporadically clever zombie-themed romantic comedy, Life After Beth makes a valiant effort to shake up the zombie movie genre in terms of tone and content, but it arrives late to the party in terms of both. it’s a nice change of pace, the story is quirky, and the players are endearing, but it’s too thin and too familiar to stick with us after the credits roll.

It starts off strong: As the movie opens, milquetoast twentysomething Zach (Dane DeHaan) is grieving over the sudden death of his girlfriend, Beth (Aubrey Plaza), lamenting the things he never told her and the future they would never have together — or so it would seem. Beth suddenly shows up at home a few days later, having dug her way out of her grave, completely oblivious to the fact that she had been dead in the first place. Her parents (John C. Reilly and Molly Shannon) consider it a miracle; Zach, though happy to see her, is a little more skeptical.

As time passes, his concerns gain some ground: Beth begins to exhibit superhuman strength, some apparent decomposition, and an insatiable taste for meat. She also becomes increasingly belligerent, possessive, and self-centered. As if a zombie girlfriend wasn’t bad enough, she turns out to be a particularly overbearing one as well, and it’s difficult to tell which is more insufferable. It becomes apparent that Zach was the doormat in their pre-death relationship, as well as the ones he has with his parents (Paul Reiser and Cheryl Hines) and overbearing security guard brother (Criminal Minds‘ Matthew Gray Gubler). Zach finds himself struggling to assert himself just as a full-blown zombie-pocalypse flares up.

Unfortunately, writer-director Jeff Baena fails to fully mine his story’s potential as the satire or allegory he half-heartedly presents it as. After the promising start it gradually loses momentum before falling apart in the final act. Baena frontloads the quirk and then veers into cliched jabs at suburbia and young romance that Shaun of the Dead, Zombieland, and Warm Bodies did before and did better, and it’s only sporadically amusing. The result is a one-joke movie that’s as listless and shambling as the undead.