Movie review: ‘Guardians of the Galaxy’ 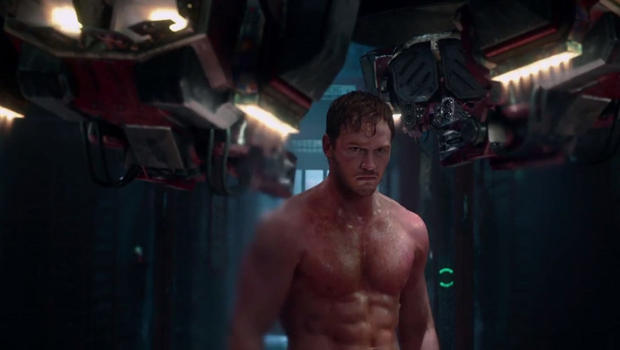 One of the most pleasant surprises of a mixed-bag movie summer, Guardians of the Galaxy is something akin to Star Wars on Quaaludes. It’s a tongue firmly in cheek throwback to cheesy ’80s-era B-grade sci-fi movies that is equal parts goofball comedy, cartoony action, and general weirdness.

The movie opens with a brief prelude: A young boy named Peter Quill is inexplicably abducted by aliens shortly after a personal tragedy. Flash forward 26 years to the present day, and Quill (Chris Pratt) is now and overgrown man-child gallivanting across the cosmos as a wanna-be outlaw calling himself “Star-Lord”. When Quill raids some alien ruins for a mysterious orb it puts him on the radar of a whole lot of unsavory beings, primarily the space pirate Yondu (Michael Rooker), who raised him and wants to make a buck off the item; and the genocidal alien zealot  Ronan the Accuser (Lee Pace), who agreed to retrieve the artifact for the mysterious Thanos (Josh Brolin) in exchange for the latter’s aid in destroying his enemies, the peaceful Xandarians, because, well, that’s what rat bastards from space tend to do.

The bounty placed on Quill ironically puts him in the sights of his future teammates/makeshift family members: Gamora (Zoe Saldana), Thanos’ “adopted” daughter who seeks to escape him; Rocket (voiced by Bradley Cooper), a genetically modified raccoon (no, really) with a chip on his shoulder, and his partner Groot (voiced and mo-capped by Vin Diesel), a walking, sentient, tree-like creature whose vocabulary is limited to the phrase “I am Groot”; and, a little farther down the road, the hulking warrior Drax (Dave Bautista), who harbors an implacable desire for bloody revenge against Ronan.

Pratt proves to be the ideal leading man here, carrying the bulk of the film and making the cocky, self-centered Quill likable enough to garner our sympathies and get us to root for his redemption without dulling the guy’s edge. Saldana is the perfect foil for him, cutting Quill down to size before falling for him (as much as the emotionally scarred assassin can, that is).  It’s Diesel and Cooper who steal the majority of the spotlight, however; Rocket and Groot are fascinating and wonderfully realized creations, and the two actors do a superb job of acting through the CGI “makeup” to make them stand out as flesh and blood people — er, aliens. Critters. Whatever. Diesel does a great job of getting just about every possible reading out of Groot’s sole signature line as well as tapping his childlike demeanor, and Cooper’s approach to the killer raccoon plumbs new levels of sarcasm. Bautista also surprises; Drax is written as an alien whose people take everything literally, setting up some choice gags that the former MMA fighter-turned-thespian delivers with perfect timing and the deadest of deadpan deliveries.

Guardians is primarily occupied with its core characters learning to find common ground and work together; as such, the villains and supporting characters are pushed into the background a little. That said, they still manage to stand out thanks to impressive casting. Of note are John C. Reilly as an earnest space-cop, Pace as the maniacal villain (faring better than the sadly under-utilized Christopher Eccleston in Thor: The Dark World), and Doctor Who‘s Karen Gillan as his henchwoman Nebula. Josh Brolin gives us a satisfying early taste of Thanos, the big baddie scheduled for Avengers 3, in a couple of brief scenes designed to tease the character. (Think the Emperor in Star Wars: The Empire Strikes Back, and you’ll get the idea.)

Guardians is based on one of Marvel’s lesser-known titles, and thus is largely free of expectations as well as a rare Marvel/comic book flick that doesn’t require viewers to be well-versed in comics lore or buried under a ton of back-story. The gist of the heroes’ histories is laid out, and just enough loose ends to allow for a sequel are left dangling without taken it for granted that one is either warranted or wanted. It does its duty in tying in with other Marvel movies and helping to set up Avengers 3 without getting bogged down with what lies further down the road, avoiding the mistake that made Amazing Spider-Man 2 such a slog. Gunn and company are able to stretch the boundaries of the Marvel formula, though they don’t quite achieve escape velocity. (that Avengers-related lore is intrusive at times.)

The only aspect of Guardians that Gunn and his cast and crew seem to take seriously is their desire to not be taken seriously, and that attitude infuses the movie with a freewheeling confidence and carefree attitude that makes it a comic book movie for people who don’t like comic book movies.

4 thoughts on “Movie review: ‘Guardians of the Galaxy’”