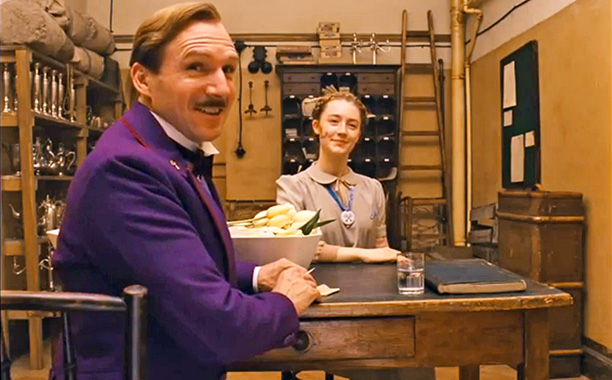 For years now the whimsical movie stylings of Wes Anderson have regularly been dismissed as something of an acquired taste, as rambling, self-indulgent musings drenched  in artifice and contrivance. Granted, there’s a lot of truth to that, but to dismiss them outright is to throw the proverbial baby out with the equally proverbial bath water. Truth be told, Anderson has been fine-tuning his cinematic voice for years, and The Grand Budapest Hotel represents a milestone in his career. It is easily one of Anderson’s most fanciful movies — and that says a lot — yet it is arguably his more nuanced and measured films to date, the product of a writer-director more in control of his style and story, instead of the other way around.

The oddball tale has a nesting-doll structure that begins with a girl visiting a monument to a deceased figure known only as Author. She flips open a book titled The Grand Budapest Hotel, and the movie immediately flashes back to the man (played by Tom Wilkinson) as he sets up the story. We flash back again to 1968, where the Author (played as a young man by Jude Law) is visiting said hospice, a run-down shadow of a once-great institution in the heart of the fictional Eastern European nation of Zubrowka. By chance he meets the hotel’s proprietor, Zero Moustafa (H. Murray Abraham, provided a warm, melancholic center to the madcap tale to come), who offers to relate the tale of how he came to own the place.

Thus we flash back one more time, to Zubrowka circa 1932. It’s a nation on the brink of war, while the Grand Budapest is a much more vibrant, hopping place (imagine Kubrick’s version of the Overlook Hotel with a Willy Wonka color scheme, inside a snow globe). Zero (played as a young man by Tony Revolori) is a rookie lobby boy under the tutelage of concierge M. Gustave (Ralph Fiennes), a man equal parts charming, competent, and oily who channels his sexual urges into wooing and bedding the bevy of wealthy dowagers who frequent the establishment. 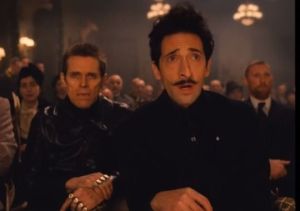 When one of his patrons (Tilda Swinton under age make-up to rival Johnny Knoxville’s) dies under mysterious circumstances, Gustave inherits a priceless painting the family revolts, setting off a chain reaction of intrigue, murders, chases, prison escapes, and shoot-outs, and earnest young love.

Anderson’s theatrical framing style is still present, and this time it is filtered through the likes of Ernst Lubitsch and Irving Thalberg and expressed with a nod towards the days of backlots and artifice that defined the Golden Age of Hollywood. His structure still has a clockwork rigidity to it, but there is more than enough room for his players to maneuver, and the eclectic cast of Anderson regulars and newbies — which includes Edward Norton, Adrien Brody, Willem Dafoe (as a particularly vile henchman), Saoirse Ronan, Bill Murray, Jason Schwartzman, Bob Balaban, Jeff Goldblum, and many others — flourishes in the midst of his carefully orchestrated chaos. Fiennes especially is in fine form, running wild in a complex role that runs the gamut of pompous, randy, heroic, domineering, confident, selfish, and fatherly — often in the space of a single line.

Despite the chaos swirling within it, The Grand Budapest Hotel never loses its focus, and at its heart lies a rumination on love, loss, and home that resonates throughout and gives the movie a reason for being beyond that of mere spectacle.