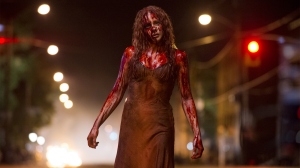 It may be cinephile blasphemy to suggest it, but Kimberly Peirce’s remake of Carrie isn’t the worst thing to hit the screen, and at times it’s fairly entertaining. Whether or not it’s existence is justifiable is a matter of personal taste (read: how rabid a fan you are of Brian De Palma’s 1976 cult classic).

To her credit, Peirce (Boys Don’t Cry, Stop-Loss) doesn’t just ape the original with flashier special effects thrown in, call it an “update”, and ask for her paycheck; she seeks contemporary relevance in this disturbing age of teens driven to suicide by bullying in the real world and in cyberspace. It’s a respectable interpretation, but it’s and uneven mix of after-school special and teen horror drama that lacks the raw power of its predecessor. 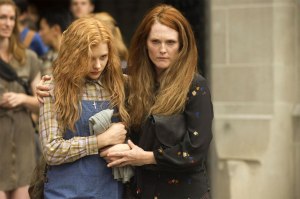 Chloe Grace Moretz (Hugo and the Kick-Ass series) stars in the title role, a shy teenage girl on the receiving end of abuse from two fronts: her scarily religious mother Margaret (Julianne Moore) at home, and a gaggle of snobby classmates led by self-entitled rich-bitch Chris (Portia Doubleday). Experiencing her first menstrual cycle — something Carrie is clueless about and terrified by thanks to her mother — in the locker room showers gives Chris a ripe opportunity to thoroughly humiliate Carrie, one that blows up in her face (literally and, eventually, figuratively). Unbeknownst to everyone but Carrie, it also signals the arrival of telekinetic abilities.

One girl, Sue (Gabriella Wilde), does feel a tinge of remorse, enough to give up her night at the prom and persuade her boyfriend Tommy (a well-cast Ansel Elgort) to take Carrie as his date instead. If you haven’t seen the original or read the original Stephen King novel, you can still pretty much guess how the evening pans out.

The movie does have a strong cast going for it, though one could argue that although Moretz can channel the necessary vulnerability and awkwardness, she’s just a little too sweet and endearing to be taken seriously as the constantly victimized Carrie. Moore is exceptional as the batshit crazy mother, avoiding the camp that seasoned Laurie Piper’s performance in favor of something more sinister, and she and Moretz play well off one another. Elgort channels some genuine charm as a would-be love interest, and Judy Greer (Archer and scads of TV and film rom-coms) stands out as the gym coach who is the only person looking out for Carrie.

It’s a good thing the actors pull us in, because although Peirce brings the story into the new millennium (one of the girls in the shower scene records the incident and posts it online), there’s not much added to the now familiar story, despite how much it mines everyday life in search of relevance. It’ll connect with teens who can’t bring themselves to watch something that hasn’t been made in the past five years; for the rest of us, it’s a runner-up for blood-soaked prom queen.