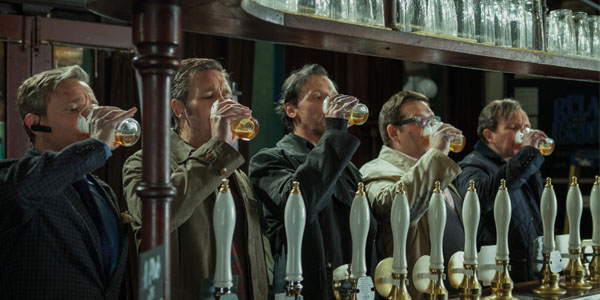 The third collaboration between writer-director Edgar Wright and actors Simon Pegg and Nick Frost, The World’s End pulls off an impressive feat at the tail-end of a summer movie season loaded to the gills with varying apocalypses and mind-numbing scenes of mass destruction by finding humor in Armageddon, outdoing the similarly themed This is the End by having characters that one can relate to. A beer-soaked rumination on the pitfalls of nostalgia and mid-life crises, it’s The Big Chill by way of Invasion of the Body Snatchers, with a little Village of the Damned thrown in just for the hell of it.

The movie rounds out their so-called “Three Flavours Cornetto” Trilogy (named in daft homage to Kryzstof Kieslowski’s Three Colors Trilogy as well as the brand of ice cream that appears in each film) that began with Shaun of the Dead in 2004 and Hot Fuzz in 2007. Wright and Co. shake up their formula little this time around by casting Pegg as the screw-up, specifically a burnt-out loser named Gary King who never outgrew the good ol’ days spent with his mates in the small town of Newton Haven. Reminiscing about the past in group therapy, he concocts a plan to gather his old friends for the first time in 20 years and complete The Golden Mile — the epic pub crawl they failed to finish on their final night together.

It takes some cajoling and manipulation, but he manages to convince the four of them — divorced architect Steven (Paddy Considine, The Bourne Ultimatum), milquetoast car salesman Peter (Eddie Marsan, Sherlock Holmes), uptight real estate broker Oliver (Martin Freeman, The Hobbit), and corporate lawyer Andy (Frost) to join him. The latter takes some doing, since he bears a grudge against Gary due to the events of that fateful night, and has since given up drinking.

It’s an awkward evening to say the least, with the four uncomfortable trying to reconnect while watching Gary prove that there is nothing sadder than a Goth kid pushing 40 who refuses to act his age. The evening goes from bad to considerably worse with the creeping realization that sinister forces have overtaken Newton Haven. Gary convinces them that their best hope is to keep moving — and drinking — until they can make their escape, though his motives are obviously biased.

Wright’s story pulls off an astounding mix of middle-age rumination, science-fiction homage, and movie lover’s geek-fest. What really makes it tick, of course, is the ensemble cast that also includes Rosamund Pike (as a romantic interest in a very odd, very British love triangle) among its eclectic mix that allows for character amid the chaos. Amid the expertly rendered carnage and clever gags are some sharp observations about conformity, freedom, and the pros and cons of living life on one’s own terms.

Wright has also honed his skill as a filmmaker to a fine edge. His rapid-fire pacing and off-the-cuff style are still intact, but now he shows more confidence and has divested himself of the overkill that made his Scott Pilgrim vs. The World a chore to sit through.

Ultimately, it’s Pegg who steals the show as the cool kid who has fallen from grace, equal parts embarrassing and endearing, left behind when everyone grew up and got a life and lacking the sense to move along as well. But then again, as he so succinctly puts it in the climax, “It’s our basic right as humans to be fuck-ups.”