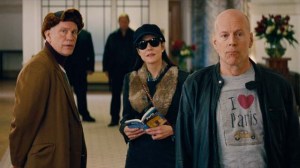 Much like its 2010 predecessor, based on Warren Ellis and Cully Hammer’s comic book about elderly secret agents forced out of retirement after they’re targeted for elimination, Red 2 is free from lofty expectations. Red was a surprise sleeper hit that earned points from a smart script, fantastic casting, and the novelty of watching Helen Mirren kick ass, take names, and fire off a really BIG gun. Director Dean Parisot and screenwriters Jon and Erich Hoeber are content to stick with that formula; it’s not as fresh as its progenitor, but Red 2 somehow manages to skate by — barely.

Shoot-outs, fist fights, car chases, ‘splosions, and romantic misunderstandings ensue. The story is an unnecessarily busy one that has the group bouncing from D.C. to Paris to London to Moscow and back to London at a pace that would make a travel agent’s head spin, but all that globe-trotting only seems to highlight the thin plot it’s meant to disguise. But this isn’t a National Geographic special, it’s an action flick, and in that sense it delivers in spades, with the appropriate degree of excess.

What makes Red 2 a better-than-average action movie, however, is its cast, even when they arrive late in the tale (Hopkins) or aren’t given much to do (McDonough and Cox); Dame Helen and Malkovich provide equal parts classy and weird, respectively;  Lee gets the meatiest role in the West to date; Parker pulls of naive-but-sharp quite well, and  Zeta-Jones providing her with an excellent foil. If there’s anyone who seems out-of-place, it’s Willis. He’s stuck with playing the straight man in the middle of an ensemble of eccentrics, and he seems to be going through the motions much as he did in A Good Day to Die Hard. C’mon Bruce, isn’t retirement supposed to be fun?