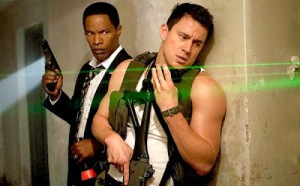 Channing Tatum and Jamie Foxx go all “Die Hard in D.C.” on the bad guys in ‘White House Down’.

The inevitable comparisons of Roland Emmerich’s White House Down to the recently released Olympus Has Fallen are unavoidable. Both use the same premise with only minor variations; the difference is that the former skates by thanks to a little humor, more likable characters played by a more charismatic cast, and a surprising amount of relative restraint.

Both crib shamelessly from the Die Hard franchise and feature the White House being stormed by well-armed and well-trained goons with a political ax to grind and a hankering for the nation’s nuclear stockpile, only to be foiled by a lone cop with emotional baggage.

This time around the goons are a motley confederation of white supremacists, right-wing militia, and disgruntled mercenaries led by Jason Clarke and hired by a traitorous Secret Service agent (James Woods) — a detail so blatantly telegraphed from the get-go that it barely qualifies as a spoiler.

The lone cop is John Cale (Channing Tatum), and his baggage is a troubled relationship with his 11-year-old daughter Emily (Joey King) and ex-wife (Rachelle Lefevre), as well as a failed interview with the Secret Service carried out by an ex-girlfriend (Maggie Gyllenhaal). Fortunately, he gets to prove everyone wrong when the bad guys storm the White House in the middle of a tour.

Faster than you can say “Yippee-kai-yay motherfucker”, Cale is running around in a tank top and staging a running gun battle with the bad guys while trying to simultaneously  protect President James Sawyer (Jamie Foxx), rescue his daughter, and prevent nuclear Armageddon.

Ridiculous? Yup, but unlike the grim and heavy-handed Olympus, Emmerich has the sense to take White House Down‘s silly premise and run with it rather than dressing it up as serious drama drenched in jingoism, and in doing so makes a cartoonish script into what most action movies can only aspire to be: a guilty pleasure. How else can you describe a flick that has the POTUS firing off a rocket launcher from an armored limo during a car chase on and around the South Lawn?

It doesn’t hurt that Emmerich some how assembled a mind-bogglingly talented cast, one that includes Richard Jenkins, Lance Reddick, Jake Weber, and Jimmi Thompson. Ultimately it boils down to the considerable onscreen chemistry between Tatum (whose considerable comedy chops are becoming more apparent) and Foxx, whose everyman-thrust-into-action president is far more engaging than the glorified hostage Aaron Eckhart was saddled with. (He’s still not quite Harrison Ford in Air Force One, but who is?)

It also helps that Emmerich supplies the requisite amount of ‘splosions and mayhem without resorting to the detached, casual slaughter that caused Olympus veer towards poor taste. It’s a bit of a shock, considering this is the guy who stomped New York City in Godzilla, trashed most of the planet in 2012 and The Day After Tomorrow, and famously disintegrated the White House once before in Independence Day. This time around, he settles for flattening just a portion of the Presidential Palace, ravaging the Capitol Building, and downing Air Force One. Apparently one does mellow with age after all.