Cursed by bad-timing and a severe lack of originality, Ruben Fleischer’s Gangster Squad is every bit as generic as its title indicates. It’s certainly pretty to look as its glitzy visual recreation of Los Angeles circa 1949 drips sumptuously with glamour and period detail; however, the creativity ends there, with Fleischer wasting a top-notch cast in a derivative and formulaic tale of cops and mobsters.

This is a surprise and a disappointment, seeing as how it was adapted for the screen by former L.A. homicide detective Will Beall, from veteran Los Angeles Times reporter Paul Lieberman’s 2012 nonfiction book Tales from the Gangster Squad — a treasure trove of material that goes squandered.

Based loosely on fact, the movie follows the exploits of a special off-the-books police squad formed by rising LAPD chief William Parker (Nick Nolte) to blunt the mob’s rising presence in the City of Angels, specifically the aspirations of Jewish boxer-turned-gangster Mickey Cohen (Sean Penn). He selects WWII veteran Sgt. Jack O’Mara (Josh Brolin) to hand-pick a squad and wage guerilla warfare on Cohen; O’Mara assembles Sgt. Jerry Wooters (Ryan Gosling), a world-weary womanizer whose involvement with Cohen’s girlfriend Grace (Emma Stone) is a boon as well as a complication; black beat cop Coleman Harris (Anthony Mackie); aged gunfighter Max Kennard (Robert Patrick) and his rookie Latino partner Navidad Ramirez (Michael Peña); and surveillance expert/electronics whiz Conwell Keeler (Giovanni Ribisi). As far as casting goes, this is a dream team, but as far as the writing goes they’re strictly a Magnificent Seven-style gathering of loosely defined archetypes, a Dirty Half-Dozen of caricatures painted in broad strokes (i.e., one is partial knives, one is a sensitive family man, one is a cantankerous old geezer, etc.). The actors are rarely given a chance to expand their characters, and when they are it is via rote, clichéd melodrama. 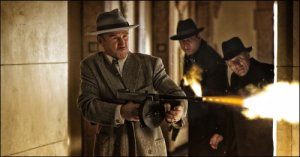 Gangster Squad occasionally perks up, such as when Cohen’s psychotic escapades subside long enough to allow Penn to do his thing, when Jerry and Grace pursue their tempestuous romance (albeit via some really awful faux-’40s dialogue), or when O’Mara’s long-suffering wife (a superb Mireille Enos) brings some genuine emotion into the story.

Unfortunately, these moments are drowned out by bombastic but style-less action beats and formulaic story. Gangster Squad riffs heavily on The Untouchables, Mulholland Falls, and L.A. Confidential without saying anything new or distinct, or even bothering to hide the fact it’s ripping them off. It’s extremely predictable; within a half-hour we pretty much know what’s going to happen to whom, in what order, and when. There is no complexity to the story, no twists to the plot, no subtext to be explored; it’s a missed opportunity given Los Angeles’ turbulent history of crime and corruption.

Fleischer and Beall pay lip service to the pros and cons of going outside the law in order to uphold, but play it safe by never really exploring the implications or repercussions. This is ironic when you consider the checkered history of the LAPD and the roles these men played in it. (Chief Parker, for instance, overhauled the department, organized the nations first SWAT team, and integrated the force even though he supported the city’s racist elite. His aide-de-camp was the notorious Daryl Gates, featured in the movie as a throwaway character.)

When, during the movie’s coda, O’Mara expresses pride in keeping the mob from gaining a foothold in the city and having made El Lay a better place, it’s a sentiment that rings resoundingly hollow. In the end, we’re left with a glossy period piece that is like Cohen himself: violent, erratic, lacking in charisma, and only sporadically entertaining.