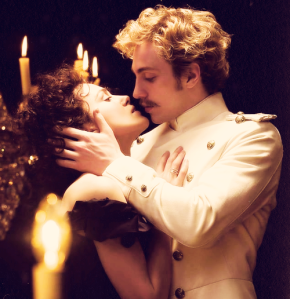 Visually lush but otherwise over-thought and overwrought, Joe Wright’s misguided adaptation of Leo Tolstoy’s epic tragedy sucks the life out of a classic staple of literature and film. Wright (Atonement, Pride and Prejudice) stumbles from the moment the curtain literally raises by presenting the story as if it were a stage play inside a film, with action taking place both onstage and in the rafters. It’s an interesting metaphor for the rigidity of life in 19th century high society, but it doesn’t work very well on film, especially when it’s inconsistently applied.

Keira Knightley (Seeking a Friend for the End of the World) stars in the title role, the seemingly happy wife to a kind but emotionally remote husband (Jude Law), who persuades her to visit her wayward brother Oblonsky (Matthew Macfadyen) and encourage him to reconcile with his own wife. While in Moscow, she meets and is iresistably drawn to a young soldier, Vronsky (Aaron Taylor-Johnson), with whom she risks her marriage, her family, and her social standing.

Meanwhile, Oblonky’s friend Costya (Domhnall Gleeson), an idealistic young farmer, seeks the hand of Kitty (Alicia Vikander), who is at first infatuated with Vronsky, but turns to Levin after the soldier becomes involved with Anna.

Costya is usually downplayed in adaptations of the story, but fortunately not here; his is one of the few compelling character arcs in the film, and Gleeson gives a fantastic, nuanced performance with an underwritten role. Ultimately it is Law who anchors the movie, though the perpetually dour Karenin makes for a thanklessly cold core to a nebulous movie. as Anna’s portion of the story sinks into melodrama and hammy hysterics presented under a veneer of hyper-style, Knightley sinks into another bout self-conscious over-acting, though it’s arguably a fitting approach this time around. Most of the rest of the cast is wooden and bland.

With few, if any, characters to become engaged with, Wright’s movie is a very detached, frigid experience. Staged like a high-minded puppet show, the heavy gloss of contrived artifice doesn’t disguise the fact that we can see the strings as they’re being pulled.