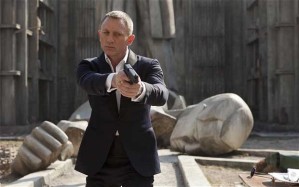 Nobody Does It Better: Check out Movie Ink’s overview of the 10 Best Bond Movies Ever.

After 22 movies spread across 50 years, it seems almost counterintuitive that the 007 franchise could offer little more beyond its time-tested “kiss kiss, bang bang” formula; however, with Skyfall we’re given what is arguably the best Bond movie to date, as well as the most significant one since On Her Majesty’s Secret Service.

It also presents us with a Daniel Craig who has at last grown comfortable in the role, finding that sweet spot between the classic feel of Casino Royale and the unrelenting sturm und drang of Quantum Solace. He projects the first-ever true-to-life 007: world-weary, mentally and physically scarred, and deeply flawed, but all the more heroic despite (or, perhaps, because of) his shortcomings.

Skyfall also benefits from being a more tightly focused and personal story than its predecessors, and not just for our favorite super spy. The movie opens with a sequence set in Istanbul that has Bond attempting to recover a list of the identities of all of MI6’s undercover agents, climaxing with his apparent death before sequeing into one of the series’ trademark trippy credit sequences.

Bond is,  of course, alive, and the list is a macguffin, a means to an end for a shadowy terrorist named Silva (a thoroughly chilling Javier Bardem) to wage a personal vendetta against MI6 in general and M (Judi Dench) in particular, going so far as to stage a series of attacks that strike at the heart of the organization and leave numerous agents dead. Bond comes in from the cold, determined to protect M and bring in Silva, while a disgraced M tries to avoid being pushed into early retirement by government bureaucrat Gareth Mallory (Ralph Fiennes).

The emotional stakes are much higher this time around, and the personal nature of the story puts all the principal players under the microscope: a middle-aged Bond is feeling his years and finds himself confronting the childhood tragedy that shaped his life; M struggles to control the fall-out of a tough, questionably decision made earlier in her career. Both Craig and Dench rise to the material, as does Bardem as the oily, sadistic, slightly tragic, and very much in control Silva. Rather than your standard megalomaniacal villain on a world domination kick, he is instead MI6’s worst nightmare: one of their own, turned against them; Bardem’s performance comes close to going over the top (this is a Bond villain, after all) but he never falters, giving us something akin to his Anton Chigurgh from No Country for Old Men seasoned with a little Hannibal Lecter and the Joker.

Best known for weightier fare such as American Beauty and Revolutionary Road, Academy Award-winning director Sam Mendes (who directed Craig in Road to Perdition way back 2002) proves just as adept at pulp genre filmmaking. He and cinematographer Roger Deakins (Mendes’ Jarhead and every Coen Bros. movie since Barton Fink) expertly stage Skyfall‘s action sequences with flair, especially Bond’s battle with an assassin in a Shanghai skyscraper (filmed in one impressive shot) and the moody final confrontation on the Scottish moors. Deakins especially gives the series a visual richness it’s never had before.

By the time the gun barrel outro ushers in the closing credits Bond has been re-invigorated for another 50 years of service to queen and country.