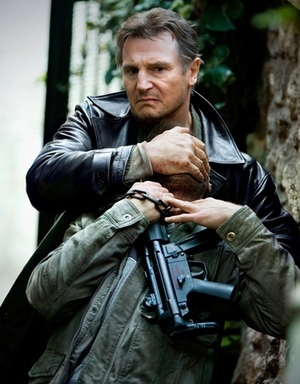 Liam Neeson puts his particular set of skills to use again in ‘Taken 2’.

You’d think people would have learned to stop fucking with Liam Neeson by now.

Let’s put it into perspective: In the past few years of his career alone he’s killed shitloads of terrorists, led the A-team, been a talking lion, slapped around half of ancient Greece, and taken on a pack of wolves with his bare hands in the Alaskan wilderness. He’s so immune to pain that when he fractured his pelvis in a motorcycle accident in 2000, he crawled 15 miles back to his house just to use the phone. He didn’t call 911; he called his mechanic and berated him for three straight hours about the shitty job he did on servicing his brakes.

Yet fools still get in his way, and Neeson continues to steamroll them, which pretty much sums up the gist of Taken 2. The first installment was a surprise hit that has since become something of a cult fave; the inevitable follow-up, however, succumbs to sequelitis: it’s pretty much the same thing, only more of it.

Neeson returns as Bryan Mills, the retired CIA agent turned bodyguard-for-hire who tore through a score of scumbags across half of Paris with alarming ferocity when his daughter Kim (Maggie Grace, officially way too old to playin teenager) was kidnapped by Albanian sex-traffickers. Part two opens with the funeral of some of those dead bastards, where their patriarch (Rade Serbedzija) swears swift and brutal vengeance upon Mills.

When Bryan, Kim, and his ex-wife Lenore (Famke Janssen) take a trip to Istanbul, Bryan and Lenore are kidnapped by the Albanians. Bryan is able to arrange for Kim to come to the rescue with guns, grenades, and a map of Istanbul, setting off an elaborate (read: tedious) series of chases, shoot-outs, and ass kickings.

Granted, that’s part of what made the first movie such a great guilty pleasure. However, that movie was also driven by the palpable sense of rage emanating from Neeson/Mills’ every pore; he was a very dangerous, very determined man hellbent on rescuing his daughter. Here, the novelty has worn off, the energy is gone, and the formula doesn’t seem to lend itself to much more.

There’s just too much missing this time around; gone are the superbly staged action sequences, jarring violence, unpredictability, and cold, ruthless detachment of Neeson’s performance. Instead we get poorly edited action sequences, underdeveloped villains, minimal plotting, and bad dialogue. When Mills tells his adversary “I’m so tired of it all” we can’t help but wonder if he’s referring to this repetitive, derivative mess. Both Neeson and fans deserve better.