From the Vault: ‘American Pop’ 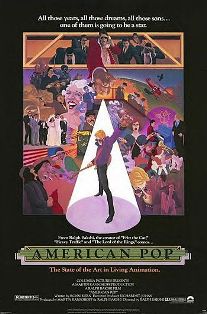 As with most of animator Ralph Bakshi’s projects (Fritz the Cat, Wizards, Fire and Ice, Cool World), American Pop (1981) is a flawed but fascinating feature that aims for more than it could reach, and is as messy as it is brilliant.

The sprawling and too ambitious story traces about seven decades of American pop music via an American Dream story that spans four generations of one family: Zalmie (Jeffrey Lippa), a Russian Jew who immigrated as a child to the US in the 1890s and becomes a vaudeville singer, only to have his career cut short by a wound that ruins his voice. His son Benny (Richard Singer) is a talented jazz pianist uninterested in a music career, who fathers a son of his own, Tony (Ron Thompson), before dying in WWII. Arguably the main character of the piece, Tony is a talented songwriter who morphs from a Brando-esque rebel to smack-addicted hippie who sires another male child, Pete (also Thompson), during a one-night stand with a waitress before disappearing into the night and an unknown fate. A musical prodigy, Pete it the sum of his forebears yet the least like them, growing up on the streets into a tough punk — equal parts Johnny Rotten and Lou Reed — looking to make the leap from drug dealer to professional musician.

It’s a lot to cram into 96 minutes, and the material doesn’t always get the attention it deserves; that said, it’s still an engaging work about the complex relationships between fathers and sons, dreams drive us to ruin before they deliver greatness, love, loss, and regret. Bakshi’s controversial rotoscoping technique (animating over live footage) is utilized throughout most of the movie — as are computer graphics, water-color backgrounds, and live-action and archival footage — and looks more natural here than in any of his other films.

The extensive soundtrack was limited by the movie’s minimal budget, which works largely in its favor; unable to afford the likes of the Beatles, Elvis, Sinatra, or much else in the way of overly familiar music of the eras covered, Bakshi was forced to make more creative selections. As such, we get some splashy visual sequences set to Pat Benatar’s “Hell is for Children”, the Sex Pistols’ “Pretty Vacant”, and classic works by Jerome Gern, George Gershwin, Scott Joplin, Bob Dylan, The Mamas and the Papas, The Doors, and others. On the downside, its climactic scene (set to Bob Seger’s “Night Moves”) and closing medley (predominately featuring Lynyrd Skynyrd’s “Free Bird”) offer a disturbing view as to what Bakshi saw as the culmination of 70 years of American songwriting evolution.