you're reading:
the Blog

Fall of the ‘Titans’ 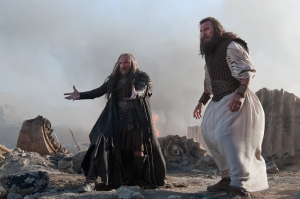 “I mean really — I didn’t have to get this camped up for Harry Potter!” Fiennes and Neeson know it isn’t easy being Greek.

Box Office Mojo reports that Wrath of the Titans had a brutal opening weekend.  While it’s no surprise that it did not unseat The Hunger Games from the #1 spot (the former earned $200 million in its first week), Wrath‘s estimated $35.1 million opening weekend falls far short of its predecessor’s $61.2 million opening. Why? Probably because it’s a shitty movie.

Which begs one very important question: Why the hell are the likes of Liam Neeson and Ralph Fiennes wasting their time and talent on this non-starter of a franchise? Movie Ink is certain they do it to amuse themselves, just as we’re certain there must have been a conversation that went something like this:

Neeson: This is brilliant. We look like we belong in a Hawkwind tribute band.
Fiennes: I think the costume department raided one of Siegfried and Roy’s yard sales.
Neeson: Seriously, why do we do this shit?
Fiennes: I’m killing time until the Bond flick starts shooting, and you agreed to give Sam Worthington acting lessons while they bang out the script for Taken 3.
Neeson: Oh yeah. This counts as his final exam, y’know.
Fiennes: He’s fucked.