From the Vault: ‘Cabin Fever’ 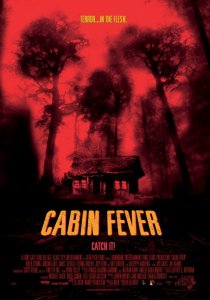 Consider it an unabashedly guilty pleasure: Cabin Fever (2002) is a tongue-in-cheek, low-budget indie horror comedy with a wicked sense of humor that was sorely missing from the brainless horror schlock of the early 2000s. While those movies were content to rehash the same slasher tropes ad nauseum with little irony, writer-director Eli Roth made his feature film debut with a big splash — or perhaps “splatter” would be a better word.

Five college kids (Jordan Ladd, Rider Strong, Cerina Vincent, Joey Kern, and James DeBello) have their vacation in the woods turned into a nightmare by a flesh-eating bacteria that puts them at odds with one another, their surroundings, and the obligatory local yokels. Things go badly, with Roth finding novel ways to catch us off guard via raging Dobermanns, the dangers of shaving one’s legs at the wrong time, weird children, and failing to invest in bottled water. It’s also a morality tale about the importance of compassion, as one character notes: “He came to us for help. We set him on fire!”

Up to this point it was typically the latter that horny co-eds had to be wary of in films like these. Roth cranks up the creep factor by delivering a killer that is unseen and undetected until it’s far too late to do anything about it, and then finds ways to pile more gore and dread on an already horrific situation. Add in a strong dose of surrealism and dark humor, and the result is a savvy homage to the rural horror flicks of the ’70s that shaped Roth’s, ahem, tastes. It’s arguably a send-up in the same vein as the recent Cabin in the Woods, just not quite so blatant.

He hasn’t been this good since, unfortunately, content to coast with the hollow Hostel and practicing his acting chops in Quentin Tarantino flicks. It remains to be seen whether or not he regains this level of creative fearlessness.

[Editor’s note: I had the pleasure of interviewing Roth for an article for the Dallas Morning News while he was doing his press tour for Cabin Fever in 2002. You can read it here.]