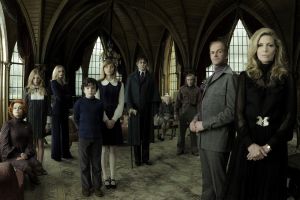 Johnny Depp (center) and the rest of cast of ‘Dark Shadows’.

presented by our friends at Premiere Video.

Johnny Depp starring in a Tim Burton remake of the cult-favorite ’60s-’70s gothic soap opera may seem like a no-brainer, but fans of any or all of the above will be hard-pressed to find much satisfaction in Dark Shadows. It’s a vampire comedy without much bite, and its quirkiness wears thin quickly.

Bearing only a passing resemblance to the cheesy but much-loved TV series (whose hardcore fans have held an annual convention since 1983) it struggles to find a balance between humor and horror. The chills are limited, and the laughs are mostly derived from watching an 18th-Century vampire try to navigate the swinging, liberated world of 1972.

That is the situation Barnabas Collins (Depp) finds himself in after spurning the love of servant girl Angelique (Eva Green, vamping it up in a much different way) — who happens to be versed in black magic. Angelique retaliates by cursing the Collins family, killing Barnabas’ beloved Josette (Bella Heathcote), turning him into a vampire, and burying him alive for two centuries — all in the first five minutes of the film.

Flash forward to 1972. An unearthed Barnabas returns home to find the Collins estate and his descendants have fallen into squalor: matriarch Elizabeth Collins Stoddard (Michelle Pfeiffer) tries to keep the family together and its fishing business afloat while her self-centered brother, Roger (Jonny Lee Miller) chases women and blows cash; her daughter Carolyn (Chloe Grace Moretz) is a typical rebellious teen, while Roger’s 10-year-old son David (Gully McGrath) is a troubled boy who supposedly sees the ghost of his mother; David’s live-in psychiatrist, Dr. Julia Hoffman (Helena Bonham Carter) uses the estate as a source of good booze, as does the equally alcoholic caretaker, Willie (Jackie Earle Haley). Also arriving at Collinwood is the new governess, young Victoria (also played by Heathcote). The family fishing empire has crumbled as well, pushed aside by a competitor run by Angel (Green again).

It’s a lot of plot getting in the way of what might have been a good story, as Burton and screenwriters John August and Seth Grahame-Smith spend an inordinate amount of time setting up so many characters and subplots for no other reason than because they were part of the original series, and thus fan service demands it (the standard curse of a TV-to-film adaptation). The same applies to the movie’s period setting, the only upside of which is ’70s-era pop/rock soundtrack that comes with it, the highlight of which is a cameo appearance by Alice Cooper as himself (“Ugliest woman I’ve ever seen”, states Barnabas.)

The promising set-up gives way to a sagging, rambling middle that deal mainly with weak stranger-in-a-strange land gags (Barnabas barking “what sorcery is this?” whenever he encounters a television set, automobile, or lava lamp for the first time) and a stunted love-triangle before abruptly stumbling into an overwrought and unsatisfying action finale.

Of the eight collaborations between Burton and Depp in the past 22 years, Dark Shadows is easily the weakest, and by a wide margin. That’s a pity, since fans have been anticipating the project for years. The two are self-professed fans of the original, but after watching their interpretation you can’t help but wonder who they were trying to amuse — the audience, or just themselves?