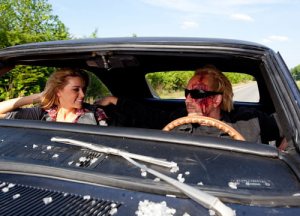 Amber Heard and Nicolas Cage are on the highway to hell in ‘Drive Angry 3D’.

Drive Angry 3D is one of those giddily trashy, gleefully self-obsessed movies that defies critique — in the conventional sense, at least. Not that that’s a bad thing; in fact, it’s so absurdly trashy and ridiculously over-the-top (on purpose, mind you) that if you don’t outright hate it, you’ll flat-out love it.

Nicolas Cage, whose bizarre career arc seems to only gain momentum like a runaway bullet train on a downhill grade with each passing year, stars as John Milton, a dead man who escapes from Hell (in a Buick Riviera, no less) to seek vengeance on self-styled Satanic messiah Jonah King (Billy Burke), who brutally murdered the man’s daughter. To add impetus, King has Milton’s infant granddaughter, whom he intends to sacrifice during the upcoming full moon for dome nefarious reason.

Along the way, Milton acquires a plucky sidekick in the form of ass-kicking waitress Piper (Amber Heard), though we suspect he’s more attracted to her jet black 1969 Dodge Charger than he is to her. While they pursue King and his redneck cultist cohorts, they are in turn pursued by a mysterious infernal bounty hunter of sorts known only as The Accountant (William Fichtner, who seems dead set on unseating Christopher Walken as the King of Supremely Weird Line Deliveries and Bizarre Supporting Roles). Shoot-outs, fistfights, car chases, ‘splosions, gratuitous nudity, bad 3-D, obnoxious one-liners, and cheesy special effects ensue.

It’s actually a lot better than it sounds, provided your tastes veer toward grindhouse fare. Drive Angry has no other aspirations than to wallow in its well-earned R rating and deliver a lewd, shock-and-awe good time, with no holds barred and no apologies offered. It’s also the movie that the B-grade Cage vehicles Ghost Rider and Season of the Witch should have been. Where they were boring, ponderous, and self-serious, Drive Angry is silly, brisk, and enjoyably tongue in cheek, with the kind of eccentric performance we prefer from Cage.

The guiltiest of guilty pleasures, it’s no Lawrence of Arabia, but when the centerpiece is a slo-mo mid-coitus shoot-out with a hero who has a gun in one hand, a bottle of Jack Daniels in the other, and a nude bartendrix in between, it doesn’t really have to be.