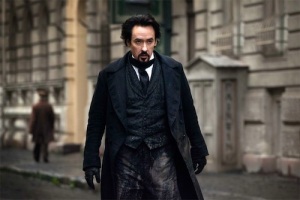 John Cusack as Edgar Allan Poe in ‘The Raven’.

presented by our friends at Premiere Video.

A tepid high-concept thriller, The Raven is nice to look at but it only timidly delivers the macabre thrills, tragic romanticism, and oppressive fatalism necessary for a movie that draws heavily from the life and works of Edgar Allan Poe.

Set during the final days of the author’s life, quickly introducing us to a Poe (played by John Cusack) in decline: alcoholic, penniless, and suffering from writer’s block, at least when it comes to his notorious fiction, which his editor Henry Maddox (Kevin McNally) prefers over his poetry and critical essays. There is one bright spot in Poe’s life: a young woman named Emily (Alice Eve). The two are in love, a relationship complicated by the fact that Emily’s no-nonsense father (Brendan Gleeson) hates him with a passion.

Poe is not without his fans, however, one of whom begins killing people in elaborate tableaus lifted from the author’s stories. Once Poe is drawn into the investigation by Detective Fields (Luke Evans), the killer ups the stakes by kidnapping Emily and forcing Poe to follow clues left at murder scenes in order to rescue her in time. He also gives Poe the deadline from hell, requiring him to write a story based on the ordeal an publish it in daily installments. (A note to editors: Don’t get any ideas.)

It’s a great premise for a period thriller, one that is sadly under-realized here. The movie hinges too much on our heroes pursuing a shadowy and largely unseen fiend who is poor foil for Poe, played to the hilt as an unlikely hero by a fully engaged Cusack. A more visible and interactive villain would have been better; the hidden identity gimmick fails to generate much suspense, and the inevitable grand reveal fails to register.

Much as he did in his debut feature, V for Vendetta, director James McTiegue shies away from diving headfirst into the story’s vibrant themes, preferring to gloss over them on the way to the flashier (and gorier) scenes.  What we’re left with is the same over-elaborate (and in this case anachronistic) serial killer plot that we’ve seen so many times before.

The Raven is visually sumptuous, and the period detail paid to the setting and dialogue is a nice touch; sadly it is wasted on a tepid thriller. During the climactic confrontation between Poe and the killer, that latter questions the darker aspects of mankind and whether he lives in Poe’s world or vice versa. It’s heady stuff; if only there had been more, sooner.