From the Vault: ‘Meet the Feebles’ 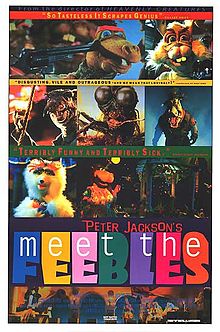 Before he turned into a serious filmmaker, Peter Jackson honed his chops by churning out some very funny — and very depraved — genre bending B-grade comedies, making a memorable debut with the aptly named sci-fi satire Bad Taste and re-inventing the zombie flick with Dead Alive decades before it was cool to do so. In between those two he made the notorious cult classic Meet the Feebles (1989) — a movie experience akin to watching the Muppets on crack.

The movie — which uses an all-puppet cast — exposes the behind-the-scenes goings-on of The Fabulous Feebles Variety Hour, a Muppet Show-esque TV series whose stars are adored by a devoted audience. In truth, they’re involved in every vice imaginable, and a few newly invented ones: leading lady Heidi the Hippo is an aging, overweight star attraction on the verge of a nervous breakdown; master of ceremonies Harry the Hare is convinced he’s infected with a terminal STD; theater owner Bletch the Walrus is a crime lord who runs a porn business on the side, while his aide-de-camp Trevor the Rat deals drugs; Wynyard the Frog is a knife-throwing, smack-addicted Vietnam vet prone to flashbacks; and Sebastian the Fox is a closeted homosexual yearning to debut the song-and-dance number “Sodomy”. Wackiness ensues, as does a climactic shooting spree.

Too call it warped is to put too fine a point on it, and to dismiss it outright would be unfair. On the surface it’s a parade of gross-out gags and ribald button-pushing material involving puppets; look deeper, and you’ll find a biting satire on fame and media obsession, as well as a testimony to the deranged genius of Peter Jackson, who hasn’t been this much fun in a long time.