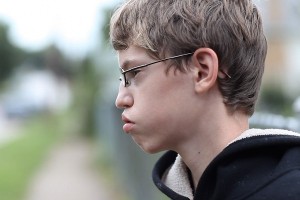 Alex, one of the kids profiled in Lee Hirsch's stunning, heartbreaking documentary 'Bully'.

Lee Hirsch’s documentary Bully is often painful to watch, so ably does it capture the torment some kids endure on a daily basis, as well as the aftereffects. Already much-discussed due to the distracting controversy stirred by the initial R rating slapped on it by the MPAA, it is a work of uncommon power.

The film follows three bullied youths through the 2009-2010 school year: Alex is an awkward 12-year-old in Sioux City, Iowa, and an easy target for the kids who call him “Fish Face” and pummel him on the school bus on a daily basis; 16-year-old Kelby had the misfortune of being a lesbian in tuttle Oklahoma, where even teachers singled her out for mockery and lifelong friends of the family turned their backs on them; 14-year-old Ja’Meya is an African-American honors student from Yazoo County, Mississippi, who was so desperate to stop the bullying she threatened a busload of classmates with a gun, landing her in juvenile hall and later a psychiatric hospital.

Even more harrowing are the experiences of two families also featured: David and Tina Long of Murray County, Georgia, lost their 17-year-old son when he was bullied to the point where hanged himself in his closet; the son Kirk and Laura Smalley of Oklahoma shot himself at age 11 for the same reason. Both families become fierce anti-bullying advocates, confronting apathetic and clueless administrators who seem alarmingly indifferent to what is going on in schools. The phrase “boys will be boys” is bandied about so often that it becomes nauseating to hear.

Hirsch places much of the blame upon said school officials, with fly on the wall perspective during incidents where they place blame upon the victim, offer empty solutions to parents and kids, or are just completely clueless; he combines those instances with ones of a 12-year-old serving as a pallbearer at his best friend’s funeral, of a teen admitting to three suicide attempts, of a parent reminding us that his son “will be 11 years old forever”.

Like all films, Bully has it weak points: the bullies themselves and their families are never interviewed, and cyber-bullying is never addressed. Nevertheless, Hirsch has constructed a stirring, heartbreaking piece of advocacy filmmaking, one that will hopefully serve as a wake-up call to parents, educators, and students, all of whom should consider it required viewing.