From the Vault: ‘Raise the Titanic’ 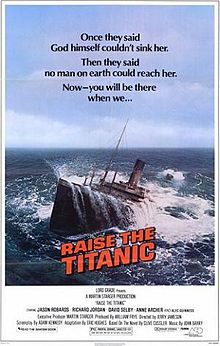 Next week will see the 100th anniversary of the tragic sinking of the RMS Titanic, the most notorious maritime disaster in history (it even eclipses Season 5 of The Love Boat). It seems appropriately ironic that one costly disaster spawned by unrestrained hubris lead to another, specifically ITC Entertainment’s adaptation of Clive Cussler’s best-selling novel, Raise the Titanic!.

The far-fetched plot involves the US and USSR in a race to find and refloat the wreck of the Titanic in order to recover a mega-rare mineral (“Byzanium”) needed to complete an impregnable missile defense system that could “make nuclear warfare obsolete”. Super-agent Dirk Pitt (Richard Jordan), America’s answer to James Bond, is dispatched to ensure the success of the mission. Wackiness ensues.

At the time it was just ludicrous enough to make for good schlock. Unfortunately, it resulted in some really bad schlock. The actual discovery of the wreckage of the Titanic five years later shredded what credibility the premise had, especially when it confirmed that the ship had broken apart on her way down.

The movie’s biggest flaw, however, is one common in tech-heavy spy-fi (*cough cough* Tom Clancy *cough*): The story relies too much on hardware and not enough on plot or character — the latter of which results in the needless waste of a cast that also included Jason Robards, Anne Archer, M. Emmett Walsh, and Sir Alec Guinness.

Made on a then-whopping $40 million budget, it grossed about $7 million at the box office. The production was such a disheartening failure that Cussler refused every offer to adapt one of his novels for the screen until Sahara in 2005 (another fiasco that resulted in the author suing the filmmakers). Like its namesake, Raise the Titanic is best left resting on the bottom.