The highly anticipated big screen version of the young adult novel The Hunger Games opens in theaters this weekend (see our review here). The material owes at least a kernel of its central premise – children forced to stalk and fight each other to the death in a wilderness arena — to the 1924 short story “The Most Dangerous Game” by Richard Connell, one of the most anthologized and adapted short stories of all time, and one that has generated an entire sub-genre of action-thrillers. Here are some of Movie Ink’s favorite “manhunt” movies:

The Most Dangerous Game (1932). A direct adaptation of Connell’ story, pitting Joel McCrea as a shipwrecked author against Leslie Banks as the deranged manhunter Count Zaroff, who stalks him across a jungle island. Filmed at the same time as King Kong, it also uses some of the same sets. Remade in 1945 and 1956, neither of which captured  this version’s intensity.

The 10th Victim (1965). An Italian adaptation of Robert Sheckley’s short story “The Seventh Victim”, starring Marcello Mastroianni and Ursula Andress as participants in The Big Hunt — a futuristic reality show in which contestants hunt each other as a means of curbing humanity’s violent tendencies. A campy satire with tongue firmly in cheek, Andress’ “bullet bra” alone makes it worth seeing. 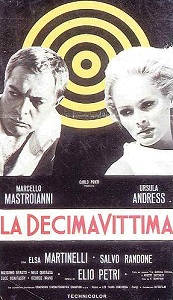 The Naked Prey (1966). A professional guide (Cornel Wilde) leading a party of hunters through the African veldt during the colonial era finds himself literally running for his life when the party offends a local tribe. He is stripped naked and given a short head start before being hunted by the natives. A one-time Olympic-level athlete, Wilde was almost 50 at the time; sick during much of the filming, he pressed on, saying the illness added to his performance.

Predator (1987). Arnold Schwarzenneger leads a squad of special-forces badasses (whose ranks include Carl Weathers, Jesse Venture, and Bill Duke) on a rescue mission in the South American jungle, only to cross paths with an alien hunter on safari who thinks they’d make great trophies. One of the best action/science fiction flicks of the ‘80s, it languished as a franchise until filmmaker Robert Rodriguez produced the enjoyably back-to-basics Predators in 2010.

The Running Man (1987). Arnie also stars in this action thriller based on Stephen King’s novella. In the near future, the economy has collapsed (again) and the populace is kept pacified by a number of TV game shows that feature convicts and dissidents fighting for their lives. A guilty pleasure, made all the more enjoyable by the likes of a brilliantly smarmy Family Feud-era Richard Dawson, and tough guys Jim Brown and Jesse Ventura.

Slave Girls from Beyond Infinity (1987). Bikini-clad space babes attempt to escape a futuristic prison on an alien world, and instead find themselves hunted for sport by a vile madman. A straight-to-video adaptation of The Most Dangerous Game that mixes action comedy, drama, and soft-core hijinks, it is B-grade exploitation filmmaking at its most inspired. Not everybody got the joke, though; Slave Girls was specifically criticized on the floor of the U.S. Senate by Jesse Helms during his push to amend the Cable Act of 1992.

Hard Target (1993). Hong Kong action-film guru John Woo made his transition to Hollywood with Jean-Claude Van Damme as Chance Boudreaux, an out-of-work Cajun who runs afoul of a wealthy sportsman (Lance Henriksen) who hunts the homeless for fun. What Van Damme lacks in talent he makes up for with a mullet that doesn’t quit, and the rest Woo covers up with his trademark action beats, ambiguous bird imagery, and gratuitous slo-mo.

Surviving the Game (1994). Ice-T vs. Rutger Hauer, Gary Busey, John C. McGinley, and others in this Hard Target knock-off about a homeless hunted for sport by a group of bored, rich white guys. T’s early work is largely less-than-auspicious, but this hunk of cheese is worth watching on Saturday afternoon network TV for one reason: to see F. Murray Abraham fight a gangsta rapper.

Battle Royale (2000). In the near-future, the Japanese government captures a class of 40 ninth-grade students and forces them into a unique bloodsport as part of a push to curb juvenile delinquency. The students are placed on a remote island, armed, and given 72 hours to fight to the death until only one survivor is left (otherwise, they all lose). Violent, provocative, and darkly comic, it’s a truly fascinating button-pusher — think Lord of the Flies as interpreted by Sam Peckinpah.

Series 7: The Contenders (2001).  Yet another satire about humans hunted for sport on a reality TV series (thankfully, despite 10 years of Survivor et al, this trend has yet to develop in the real world), featuring a pregnant woman (Brooke Smith) thrust into competition against five others — including her ex-boyfriend and a teen whose parents drive her to shoot-outs. An inspired, obscure indie.