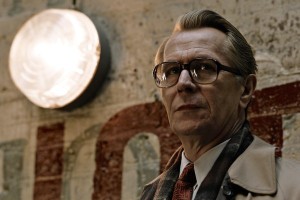 An engaging throwback to the cynical Cold War espionage movies and paranoia thrillers of the 1970s, Tinker, Tailor, Soldier, Spy plays like a time capsule of an era when civilization seemed pertually on the brink of annihilation, good vs. evil was painted in shades of gray, and high-tech surveillance in the pre-digital age meant sneaking into a house to tap a phone and having a really good pair of binoculars. Tomas Alfredson (Let the Right One In), though forced to trim a complex story down to a two-hour runtime, delivers a compelling — though often murky — adaptation of John Le Carre’s classic novel, anchored by a stellar cast.

As the movie opens in 1973, the head of Britain’s Special Intelligence Service, “Control” (John Hurt), is forced into retirement after a botched, unapproved operation in Budapest leaves an agent (Mark Strong) dead. His righthand man, George Smiley (Gary Oldman), is swept out with him. A cabal of second-tier handlers — supercilious Percy Alleline (Tobey Jones), acerbic Roy Bland (Ciaran Hinds), skirt-chasing Bill Haydon (Colin Firth), and lap dog Toby Esterhase (David Dencik) — take control of the Service by riding a wave of intelligence fed to them by “Witchcraft”, a supposedly high-ranking operative working within Soviet intelligence.

Control passes away and a young agent named Ricki Tarr (Tom Hardy) comes in from the cold with a startling tidbit of info: Control believed there was a Soviet mole in the SIS, and that suspicion is a fact. A minister pulls Smiley from retirement to uncover the double agent, and the veteran agent recruits a squad of other cast-off agents to assist him. The cat-and-mouse game that follows plays like a case study in the varying degrees of moral relatavism.

This version’s condensed form (127 minutes, whereas the previous 1979 television miniseries version ran six one-hour episodes), there is a loss of detail; viewers familiar with the book or the miniseries can fill in the blanks as needed, but newcomers will be able to infer some elements but will no doubt have questions after the credits roll.

The lifebreath of both the novel and its screen counterparts is, of course, Le Carre’s iconic main character. When the novel was adapted for television, it was faithful to the source material (almost to a fault) and lifted into cult status by Sir Alec Guinness’ performance as Smiley. It was one of is best, though overshadowed at the time by his role as a certain Jedi knight. Oldman’s embodiment of him is every bit as disarming and pitiable as Guinness’, and at times his voice and delivery are strikingly similar to Sir Alec’s. Oldman, however, embues the character with a harder edge tempered by a disarming stillness, a dangerous man hiding in plain sight. It’s an astute portrait of a spent man willing himself back to life while wading through a morass of betrayal and distrust, as well as a quite performance that speaks volumes.